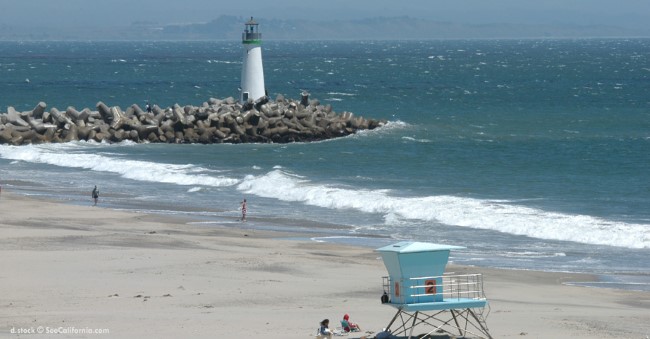 Santa Cruz, Calif.-- Walton Lighthouse is the shining glory of the Santa Cruz harbor, getting its name from Derek Walton, a merchant marine. Survived by brother Charles Walton, Derek's memory was immortalized on June 9, 2002 during the naming ceremony.

Civil and Structural Engineering firm Mesiti and Miller (known for many civic projects in the Santa Cruz harbor, City of Santa Cruz and municipalities throughout the Bay Area,) built the eye-catching Walton Lighthouse in Capitola in 2002. It was an instant success with its attractive appearance creating broad appeal. Since lighthouses by this time had already begun utilizing GPS and satellite communications to assure vessels could safely find their way into harbors and marinas, Walton Light Station became a symbol of beauty and grace appreciated by boaters who are passionate about their craft -- and the Pacific.

Standing over 41 feet and weighing 350,000 pounds, the lighthouse is one of the most attractive such structures along the California coast.

It is quite similar looking to another a lighthouse in Long Beach's harbor in Los Angeles County.

Unlike the Long Beach lighthouse which sits on a hill next to Aquarium of the Pacific, Walton Lighthouse was built on a manmade jetty prominently within view of Seabright Beach, Cowell Beach, Santa Cruz Boardwalk and Wharf.

As the need for lighthouses fades and historic structures on the California coast suffer the ravages of weather and waves, Walton Lighthouse stands as a beacon. It serves not only the memory of merchant marines, but the fascinating history of the coast which includes tales of pirates along this stretch and even shipwrecks! Millions of visitors who catch a glimpse of the Walton Lighthouse at Seabright Beach are impressed by the beauty of the Santa Cruz harbor, one of the many attractions and things to see and do in the beach region.