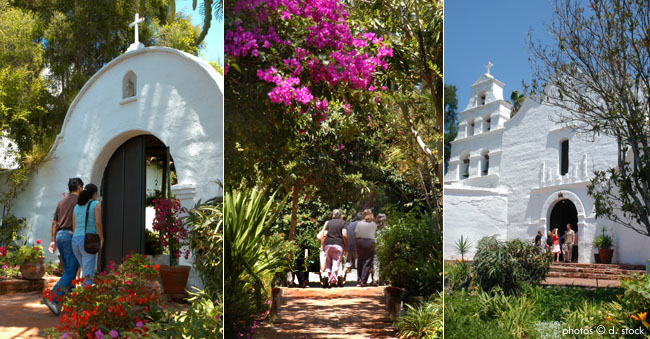 San Diego de Alcala was the first mission of 21 missions built in California (or Alta California, as it was called during the era in which it was constructed.) This mission founded in 1769 is California's first church.

Before it was built, Juan Rodriguez Cabrillo arrived by ship in the San Diego Bay in 1542, and named it San Miguel after the saint whose feast day was closest to the landing according to the Spanish tradition. In 1602 Sebastian Viscaino, leading another Spanish expedition, entered the harbor and renamed it San Diego after Saint Didacus of Alcala. This explains how San Diego and the mission got their names.

On July 16, 1769, Father Serra established Mission San Diego and the California mission system was begun on a site overlooking the bay. It stayed in that place for only five years and then was relocated six miles east-- close to the San Diego River and the American Indian villages.

When 800 American Indians stormed onto the grounds in the middle of the night on November 4th, 1775, they pillaged the mission, burned it to the ground and massacred Father Jayme who became California's first Christian Martyr and who is buried under the altar in the present church. Father Serra returned to Mission San Diego de Alcala to oversee the rebuilding of the mission. Fearing that would be another raid, the padres rebuilt the mission according to the specifications of an army fort.

Reestablishing the mission was a long, difficult process for one of the poorest missions that lacked a steady water supply.

n 1892, the Sisters of Saint Joseph of Carondolet moved onto the mission compound and conducted an American Indian childrens' school for 17 years. In 1931, the mission was rebuilt to mirror the 1813 church. It is an active Catholic parish today where you can attend services.