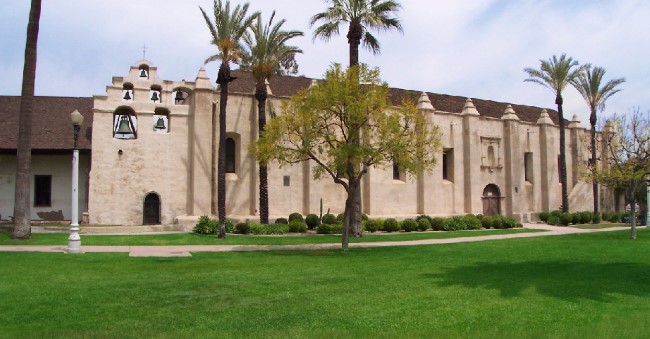 Mission San Gabriel Arcangel was the 4th of 21 Spanish missions built in California, constructed in 1771 just after San Antonio Mission on the Central Coast of California. It contained the first hospital in California under the Franciscan order. Built five miles from the current location, the original mission was located in what is now Montebello. It was relocated due to devastating floods that wiped out the mission crops and destroyed building structures.

The San Gabriel mission took time to settle but became one of the most prosperous in the chain. Not only did it supply food and wine to other missions along the coast, it also baptized over 25,000 people in a span of around 60 years.

Though the mission was originally going to be built on the banks of the River Earthquakes (Santa Ana River), it didn't escape Southern California's earthquakes by its builders choosing a different location. In 1812 earthquakes shook the building structures and caused a three-bell campanario to collapse. A six-bell structure was constructed afterward.

The San Gabriel Mission, named after the Archangel Gabriel, was designed by Spaniard Antonio Cruzado, whose designs such as tall, narrow windows and capped buttresses are unique among the California missions. His designs included strong Moorish architectural influence that was integrated and mixed with other styles in some of the missions built.

While the current building architecture dates back around 200 years, one of the mission gems is 300 years old. The painting, Our Lady of Sorrows, hangs in the sanctuary and its presence is a reminder of legends such as one story that the native Tongvas who sought to drive away the Spaniards immediately made peace with the missionaries when they saw the inspirational painting and were moved its beauty. The public can visit the mission and tour a portion built in 1812 which is now used as a museum. It first served as sleeping quarters for the missionaries and a library with books.

On the mission grounds guests can see a cemetery, indoor and outdoor kitchens, winery, water cisterns, soap and candle vats, and tanning vats for preparing cattle hides. The grounds include gardens with flowers, including some native plants.

A cemetery on the grounds marked with a large stone cross contains the graves of over 6,000 native Americans and Franciscans who served at the mission.

The mission you visit today has been renovated, as all the surviving missions have. The 1834 secularization that took the missions out of the hands of the Spaniards, suddenly left the mission grounds without a caretaker. The once-extensive vineyards fell into decay, fences broke and animals roamed free, and the building began to collapse.


From 1862 to 1908 Claretian missionaries worked to rebuild and restore the facility that once stood in glory as a successful model. Subsequent damage occurred when the Whittier Narrows Earthquake of 1987 shook its foundation and further damaged the property. Mission San Gabriel was again reinforced and rehabed once again.

Matrimonial Investigation Records of the San Gabriel Mission span 1788-1861 and include notarized interviews with couples wanting to marry in the Roman Catholic Church. They are a valuable resource for research on the pre-statehood activities of the Mission. California Digital Library has an online guide available to search the collection.