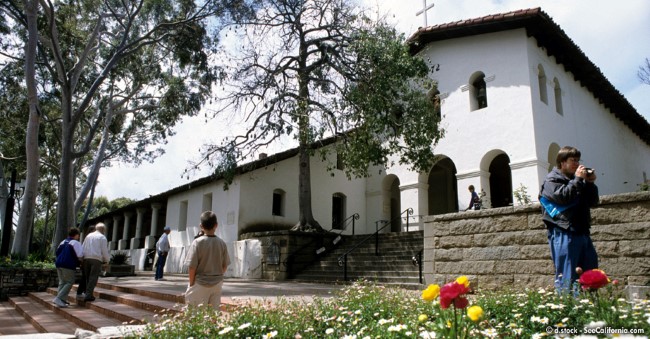 Mission San Luis Obispo de Tolosa serves as a parish with an active church attendance and services. Tourists can wander into the chapel and onto the grounds to see the beauty of this beautiful mission located in the heart of downtown San Luis Obispo.

Mission San Luis Obispo de Tolosa was the 5th of 21 missions built in California. It was founded by Father Junipero Serra in 1772. The mission site was chosen by Serra after he returned to his home-base mission in Carmel and the food supply began to dwindle along with support for the mission effort from Spain. Father Serra remembered the valley where bears were abundant and would make good meat to feed the staff. Now called Los Osos, a bear statue marks an area of San Luis Obispo County not farm from the city.

Mission San Luis Obispo was built slowly with a small staff directed by Father Cavalier and scant funds in a slow process. It is now in the center of the city that formed around the mission and is one of the few missions where the city center actually grew next to the mission. Its location within downtown San Luis Obispo makes it a favorite for tourists, and the outdoor steeps and an amphitheater provide a venue for special events, concerts, and performances under the shade of oaks and other trees above a creek that runs next to the mission.

The mission renovations generally do not attempt to remain true to historical renditions. Several examples of missions nearby that are more authentically restored and painted include La Purisima Mission in Lompoc to the south, and Mission San Miguel near Paso Robles to the north. At Mission San Luis Obispo an inner courtyard features an arbor with grapes growing on it, and a replica Chumash Indian oven. The courtyard contains a BBQ area, stone walkway and a grass courtyard all used actively by parishioners today.

There was no fee to wander inside the chapel during our previous visit to the mission. It is a working church so you should be respectful of prayer sessions, lit candle traditions and any ceremonies occurring.