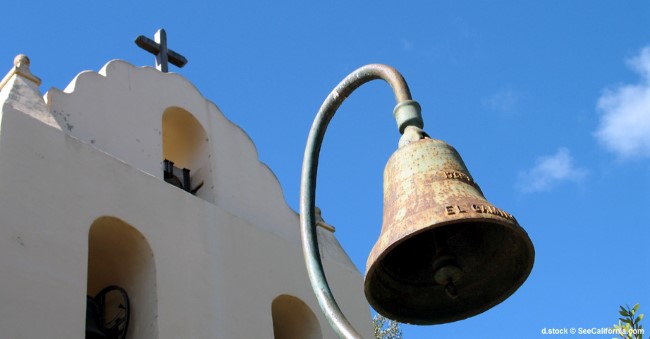 Solvang--Mission Santa Ines was founded on September 17, 1804 by Father Estevan Tapis. It was named in honor of Saint Agnes, an early Christian martyr of the fourth century. The Spanish word for Agnes is Ines. The nearby town of Santa Ynez got its name from this same heritage.

If you're looking for an inspiring place to reflect, be sure to check out the Mission garden of the Resurrection.

The 19th in a chain of 21 California missions is the favorite of many who enjoy the vistas of this missions hilltop grounds overlooking the Santa Ynez River Valley and the Santa Ynez and San Rafael mountain ranges. Some simply go to the parking lot of the mission to stand and look out at the beautiful setting that provides a serene feeling amidst the bustle of Solvang downtown shops on the perimeter of the mission grounds.

Located between Santa Barbara County's Mission Santa Barbara and Lompoc's Mission La Purisima Concepcion, the Mission was established in 1804. Devastated by the great earthquake of 1812, the mission was rebuilt and once included vast acreage with thousands of livestock and crops.

The Capuchin Franciscan Friars from Ireland arrived in 1924 and grew the small parish into a 1,000+ organization. The active parish church administered by the Capuchin Franciscan order is a community-involved establishment. Public functions such as an annual Fiesta, Story Telling Festival and the yearly Rancheros Vistadores horse-riding event and parades and cycling events all involve the mission.

There's a gift shop, church and garden to see on self-guided tours of the Museum & Gardens that are open daily from 9 am -5:30 pm. A small admission fee is charged to adults.