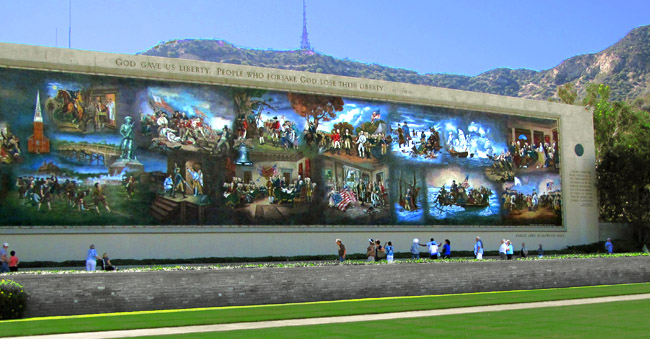 Well known actors and entertainers are buried in the Hollywood Hills location, but Presidents of the United States are given special attention in museum quality exhibits, statues and murals that thousands come to see. This cemetery feels like a major attraction--and it is!

The centerpiece art that can't be missed is Birth of Liberty mosaic. At 162 feet  long and 28 feet high, Birth of Liberty is the largest historical mosaic in the United States. It is composed of ten million pieces of Venetian glass and depicts 25 scenes from early America, circa 1619-1787. The top of the mural states: God Gave Us Liberty. People Who Forsake God Lose Their Liberty - The Founder

Scenes depicted in the mural include:
The first Legislative Assembly 1619
The Boston Tea Party
Ethan Allen at For Ticonderoga
The Battle of Lexington
Patrick Henry
Signing the Declaration of Independence
The Surrender of General Lord Cornwallis
Betsy Ross Makes Our First Flag
Washington at Prayer
Washington Crossing the Delaware

Visitors can stroll a paved walkway and look up close and personal at the amazing mural which begins above your head. It was installed more than five feet from the ground.

Monument to George Washington, a marble and bronze statue to America's first president, George Washington (February 22, 1732-December 14, 1799), atop a towering  Washington Monument. Created by sculptor Thomas Ball, four of Washington's generals are honored in the memorial. The Founding Father who served as the first president of the United States from 1789 to 1797 led Patriot forces to victory in the nation's War for Independence. He presided at the Constitutional Convention of 1787, which established the U.S. Constitution and a federal government. While Washington owned slaves he was troubled with the institution of slavery and freed his slaves in a 1799 will.

Thomas Jefferson (April 13, 1743-July 4, 1826) was third president of the United States from 1801 to 1809. The principal author of the Declaration of Independence was pro-democracy, republicanism, and individual rights. After retiring from public office, Jefferson founded the University of Virginia. While generally praised for his advocacy of religious freedom and tolerance, Jefferson claimed ownership of over 600 slaves during his lifetime.

Lincoln Terrace features a 16-foot bronze statue of Abraham Lincoln (February 12, 1809-April 15, 1865). The 16th president of the United States from 1861 until his assassination in 1865 led the nation through the American Civil War, preserving the Union and abolishing slavery. The statue at Forest Lawn by Augustus St. Gaudens is flanked by a panoramic mosaic depicting scenes from Lincoln's life. At the top of the sculpture it says: The Legitimate Object of Government is to do For the People What Needs to Be Done But Which They Cannot by Individual Effort Do At All or Do So Well for Themselves. - Abraham Lincoln

The Hall of Liberty American History Museum has a copy of the Liberty Bell and other exhibits. The museum has a 1,200-seat auditorium where you can watch a free half-hour film about the American Revolution.

The Plaza of Mesoamerican Heritage has a replica Aztec calendar.

Two presidents are pictured in the Signing of the Declaration of Independence mosaic in Forest Lawn-Glendale, John Adams and Thomas Jefferson.
The mortuary buildings at Forest Lawn-Hollywood Hills, Cypress and Covina Hills are modeled after the home of President George Washington. The mortuaries are modeled after his home at Mount Vernon.
President Ronald Reagan was married to actress Jane Wyman at Wee Kirk o' the Heather church at Forest Lawn-Glendale on Jan. 26, 1940.
President Gerald Ford lived in Rancho Mirage. Gerald Ford Drive goes through Cathedral City, Rancho Mirage and Palm Desert.
One of two historical mosaics at Forest Lawn-Hollywood Hills depicts six eventful moments in the life of President Abraham Lincoln