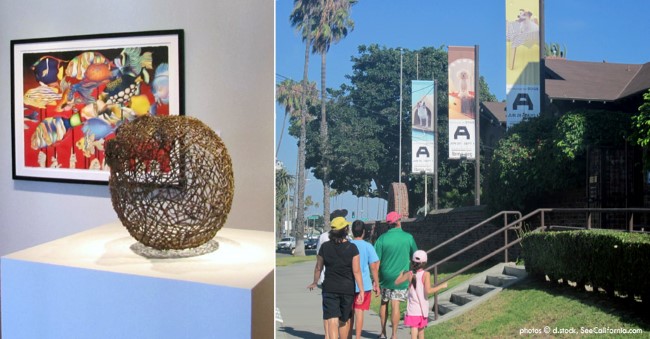 Long Beach, California -- Perched on a hill top overlooking the Long Beach Harbor is an historic house which is the home of Long Beach's beloved Art Museum on Ocean Blvd.

The museum has experienced numerous transitions from its beginnings but always continues to move forward, serving the public both as a delightful attraction and wonderful venue for special events.

The exhibits are easy to absorb due to the size of the building that houses them on three floors (basement space is rather small).

A great portion of the charm in visiting the Museum of Art is the location and the facilities, themselves. Using the natural materials and rugged texture of wood shingles and clinker brick, the building is a classic example of the California Craftsman Bungalow. Notice the prominent gables, projecting rafter beams typical of the style. The exterior of the main house and carriage house retain their original integrity and have not been altered. This style is echoed by several similar homes nearby in the Bluff Park Historic District.

In 1912 wealthy philanthropist Elizabeth Milbank Anderson sought a summer home and had the house built to serve her needs. Below her house is a beach that she might have enjoyed. She was heir to financier Jeremiah Milbank, who co-founded Borden Company, and Chicago, Milwaukee and St. Paul Railroad in 1863. That rail line later extended to the Pacific Coast.

Long Beach Museum of Art is located on a bluff-top overlooking Long Beach Harbor and the Pacific Ocean along the elegant Ocean Avenue. The museum includes a "campus" with the historic Elizabeth Milbank Anderson house and carriage house (built in 1912), used as administrative offices, the Museum Store and Café. Oceanfront gardens and a pavilion with two floors of expansive gallery space for changing exhibitions are open to the public for viewing current exhibitions and renting meeting space for special events. In addition to changing exhibitions, the Museum offers extensive educational programs for children and adults, musical programs, festivals, and other special events.
According to Fortune magazine, "A number of Milbanks have been considerable figures in the industrial history of the U.S. and the family has also left its mark on the educational and medical institutions of the country." (May 1959) Elizabeth Milbank Anderson (1850-1921) was an energetic, strong-minded woman with a wide range of interests. She was a successful businesswoman, a philanthropist, and an art collector who traveled frequently to Europe. She established Milbank Memorial Fund in 1905, which gave grants to various medical and educational projects; this fund is still in existence. She donated a library to Greenwich, Connecticut, and gave three blocks of choice New York City land to Barnard College, upon which was built Milbank Hall. She built public facilities for the poor, such as a sports arena and public baths, and established a program of free school lunches. Her husband, Abram A. Anderson, was a well-known portrait painter and friend of Teddy Roosevelt.


This large house was built on the bluff to take advantage of one of the City's prime assets - the ocean view. The house is a splendid and imposing example of the Craftsman Bungalow, a style popular in the period 1905 - 1915. It is similar to others of that style built around the same time near the ocean bluff along Ocean Boulevard and First and Second Streets in what is now the Bluff Park Historic District, and thus represents an early stage in the residential development of Long Beach. Later, in 1926, the home became the Club California Casa Real, an important social institution of Long Beach. It was owned from 1929 - 1944 by Thomas A. O'Donnell, a pioneer oil industrialist. During the Second World War, it was used by the Navy as the Chief Petty Officers' Club. In 1950, it was purchased by the City for a Municipal Art Center and was renamed in 1957 as the Long Beach Museum of Art. Thus, its succession of uses has mirrored important stages in the history of the City.