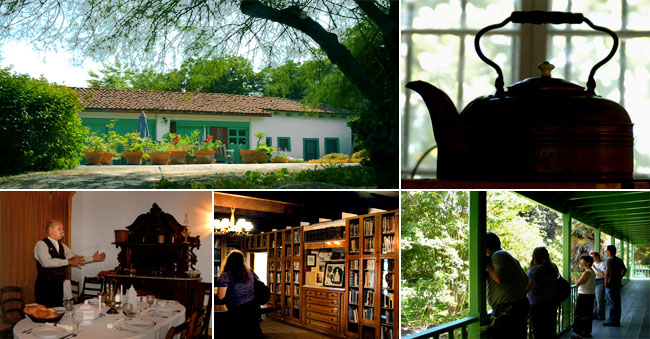 The museum is operated by the Rancho Los Cerritos Foundation, a nonprofit organization, in partnership with the City of Long Beach.

Tour the historic adobe and landscaped grounds, and learn about the rich history of Spanish, Mexican and American California.

Tours are available whenever the museum is open and last approximately one hour. It is recommended you arrive by 4 p.m. in order to receive a guided tour before the museum's 5 p.m. closing. Garden tours are Saturdays and Sundays, weather permitting, and by special request. Spanish language tours are available on the fourth Sunday of the month and by request.

The 27,000 acre rancho was part of a 1784 Spanish land grant to soldier Manuel Nieto. The historic rancho building dates from prior to 1844, when John Temple constructed a single story ranch building after marrying an heir of the Nieto family.

John Temple later sold the 27,000-acre property to Bixby, Flint and Company. The Bixby family lived on the rancho until 1881 and raised sheep as part of a large-scale ranching operation.

The rancho building was remodeled in 1930 and a new generation of Bixby family members lived in the house until 1955, when it was donated to the city.

Rancho Los Cerritos in the exclusive Virginia Country Club Estates with homes surrounding a golf course is one of two ranchos owned by the City of Long Beach (the other is Rancho Los Alamitos.)

What to see: Rancho Los Cerritos includes a two-story Monterey-style adobe dating to the 1860s. Surrounding the home are gardens and trees offering not only shade, but a glimpse into an earlier way of life. Much effort goes into maintaining the authenticity of the gardens.

Listed as a National, State and Long Beach Historic Landmark, Rancho Los Cerritos is owned by the City of Long Beach and operated through the Department of Parks, Recreation and Marine.

Though not all items are on display, you can learn about more than 1,000 clothing and textiles artifacts from the 1830s to 1930s. The museum rancho facility contains over 1,100 historic photographs of the rancho and its occupants, maps, letters, deeds and documents relating to the site. Decorated with Bixby family heirloom furniture and antiques, items on display include an 1866 deed transferring ownership of Rancho Los Cerritos to Flint, Bixby & Co. An 1870s velocipede (child's horse tricycle), 1872 Howe treadle sewing machine, 1882 California-style stock saddle and countless irreplaceable treasures.

Rancho Los Cerritos is registered as a state archaeologically-significant site. The grounds under and surrounding the adobe are rich in historical archaeological materials with trash pits from the 1840s-50s and cogged stones dating 5,000 to 7,000 years in age.

The Rancho includes California History Research Library, a 3,000+ book collection on California history cataloged through the Long Beach Public Library. The research library is available during public hours or by appointment. Archives contain original documents, maps, blueprints, photographs and sound and image recordings directly associated with the Rancho and its owners, occupants and workers.

Highlights include the Sarah Bixby Smith Manuscript Collection, Llewellyn Bixby, Jr. Manuscript collection, a series of 1872 stereograph cards of Rancho Los Cerritos by William Godfrey of Los Angeles, photographs of the site from 1872 through the 1940s, and architectural blueprints of the adobe during the 1930 remodel.

Rancho Los Alamitos and Long Beach were both part of a huge rancho spanning a large area of Southern California owned by friends and family members assigned by the Mexican government officials to maintain "alta" California properties. Alta California became part of the U.S. in 1850, but until then it was considered part of Spanish holdings, then Mexico's property when that country gained its independence from Spain.