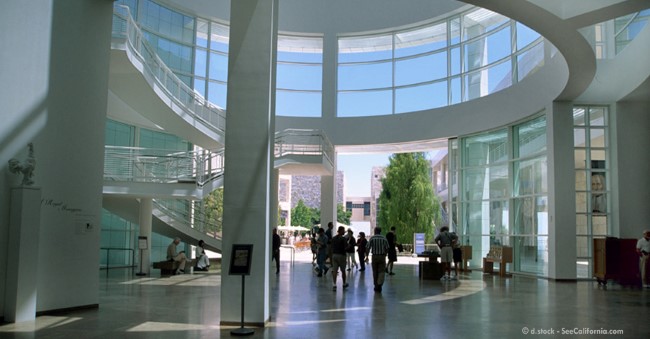 
The Getty Museum at the Getty Center is one of the finest museums in California and perhaps, the world. Sometimes simply called "The Getty", this Los Angeles free admission museum is one of the best free tourist attractions in California, and in the world. Perhaps that is why it is so popular with tourists from around the globe who come daily to gaze at the stunning scenery that surrounds the massive complex overlooking the Santa Monica mountains, Pacific Ocean, and downtown Los Angeles. The museum was built in the Santa Monica mountains near the 405 Freeway in Los Angeles.

Built from the ground up based on the architectural design of famed architect Richard Meier, the Italian travertine campus of six buildings is organized around a central arrival plaza. 1.2 million square feet of beige-colored, cleft-cut, textured, fossilized travertine was used in the project that includes curvilinear design elements and natural gardens that soften the grid created by the travertine squares. The 16,000 tons of travertine were mined in Bagni di Tivoli, Italy, 15 miles east of Rome. Split along its natural grain, Meier and his staff worked for a year with the Bagni di Tivoli quarries to invent a "guillotine" process that would result in a rough textured finish, including fossilized leaves, feathers, and branches in many stones. Travertine panels cover not only the retaining walls and the bases of all buildings, but also serve as paving stones for the arrival plaza and Museum courtyard, and on indoor walls in transitional spaces between galleries.

Meier positioned buildings along a natural ridge in the hilltop to comply with neighbors' requests that the complex be no more than two stories above grade. To accommodate and preserve nearby views, buildings are built into the ground and are linked with subterranean corridors. Architect Richard Meier sought to design the new complex so that it highlights both nature and culture, creating a synchronistic, organic whole.

Five exhibition pavilions, plus the Getty Research Institute Exhibition Gallery comprise an amazing display and array of art. And best of all, you CAN take pictures with hand-held cameras (flash not allowed) in permanent galleries and many other locations of the museum.

The Central Garden - is a 134,000-square-foot outdoor space created by renowned artist Robert Irwin. Features include a natural ravine with waterfalls and tree-lined walkway.

Where to eat: Cafe at the Getty Center is a sit-down restaurant offering lunch and dinner menus, and Sunday Brunch. Sandwiches, salads, wraps, hamburgers and other such foods are served at lunch. A more casual counter service at Garden Terrace Cafe features outdoor dining overlooking the Getty Gardens. Several coffee carts are located on the grounds of The Getty.

Where to stay: Hotel Angelino is a four star hotel, famous for its unique building shaped like a column rising into the air. Visible from the 405 - San Diego Freeway, it is adjacent to the Getty Center. If you want nice and close, stay there. It is the only hotel right next to the Getty. Also nearby are UCLA and Westwood and Santa Monica beaches a 10 to 15 minute drive.