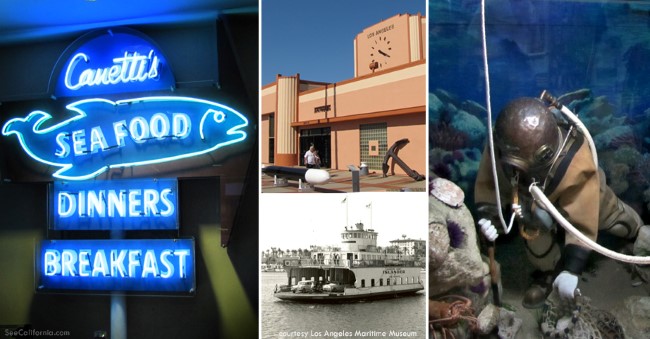 SAN PEDRO--You and your family will love one of the best hidden treasures in California--the Los Angeles Maritime Museum, located at the foot of 6th Street (Berth 84) in San Pedro. Here are 10 reasons to go:

10. HISTORIC FERRY BUILDING: The impressive place is on the Register of Historic Places. Built in 1941 as the Municipal Ferry Terminal, cannery workers, shipyard employees, Navy personnel and Longshoremen walked or drove through it to board the ferries that took them to work across the water at nearby Terminal Island. You'll revisit the experience through photos, memorabilia and being in the unique structure, which was used until November, 1963, when the new Vincent Thomas Bridge was opened.

9. INCREDIBLE MODELS: There are a whole bunch of excellent, handmade models of Navy ships, like the USS Los Angeles, and other fascinating miniatures, including the World Famous "Herman the German" Crane that lifted the Spruce Goose and many other gigantic items. The real Herman used to be outside the Long Beach Naval Shipyard. In addition to models, you can see actual customized, fullsize row boats and fishing boats.

8. HOLLYWOOD HISTORY--See the 21 1/2-foot, one ton model that took 3 months for 15 men to build and became the star of the 1972 hit movie, "The Poseidon Adventure." Plans from the Queen Mary (where some of the film's scenes took place) were used to create the exact scale model (1/4-inch equals 1 foot of Queen Mary). The model even floats. For the filming, it was equipped with battery-operated propellers, working smokestacks and interior lights, so, when needed, it could star as the fullsize vessel, "Poseidon." There's even a great photo of filmmakers in the water, working with it to create the scary scenes from the thriller.

7. WATCH CARGO SHIPS BEING UNLOADED--From the second floor windows, you can watch Cargo Ships being unloaded by tall cranes. In the museum is a model of the early 20th Century Cargo Ship, "SilverPalm," which has its own deck cranes and could load or unload cargo in 14 days, said Chanthell Nelson, Operations Manager for the Museum, which is operated by the City of Los Angeles Department of Recreation and Parks. She said the big ships today can be loaded or unloaded in 1-2 days by cranes at the Port of Los Angeles.

6. CHARLIE THE TUNA--Watch the hilarious old TV commercials that ran from 1961 into the 1980s. San Pedro pioneered the technique of canning tuna in 1903 and Star-Kist as well as Chicken of the Sea, started here, Chanthell said. There were more than 16 canneries. By 1912, the LA Harbor had over 75 commercial fisherman and hauled in 12 tons of fish (tuna, sardines, mackerel) a day in the Summer.

5. BOTTLED SHIPS--See wonderfully-constructed ships in bottles by the late Capt. Laurits Petersen of Long Beach. He started his seafaring career in 1913; worked on deep water squareriggers until the 1920s, and became a master on Union Oil Tankers.

4. 20,000 JOBS UNDER THE SEA--View a fascinating Diving Exhibit that explains the two types of diving--Fishery (i.e., abalone) and Commercial (cleaning undersides of ships as well as repairing phone cable and other things in the water).

3. A REAL LIGHTHOUSE LENS--Look at the incredible, original lens from the famous Angels Gate Lighthouse that guided ships in and out of Los Angeles Harbor from 1913-1987.

2. TUGBOAT--Gaze at the neighboring World War II Tugboat, "Angels Gate," that takes museum members on special harbor tours. Modern Tugs (that you'll see going back and forth) are indispensible in assisting ships in and out of the harbor. One of them brought the famous WWII Battleship Iowa down from Northern California for a permanent berth in the harbor.

1. USS IOWA EXHIBIT--See a display on the latest battleship to berth in San Pedro and learn key facts about the USS Iowa, called "The Big Stick" and "Battleship of the Presidents." Then go to the rear outside deck of the museum and see the actual, USS Iowa berthed in the distance.

There are so many other fascinating things to see in this museum from wooden figureheads that adorned ships to special knots tied by seamen, to exhibits on ships sank in the Pacific....There are exhibits you can hear, touch, smell and see as you learn the history of the harbor right where you are. There's a great Sea Chest Gift Shop and be sure to check out John S. Gibson Memorial Park outside, where you'll find the mast and anchors of the USS Los Angeles; the 16-inch gun barrel from the USS New Jersey, the American Merchant Marine Veterans Memorial plus much more.

Visit http://www.lamaritimemuseum.org/ or call 310-548-7618 to find out more, including the slight admittance fee for adults. Children and parking are free. It's open Tuesday through Sunday, 10-5. You'll be glad you took the time to visit this fabulous place, which tells history in a fun and memorable way.