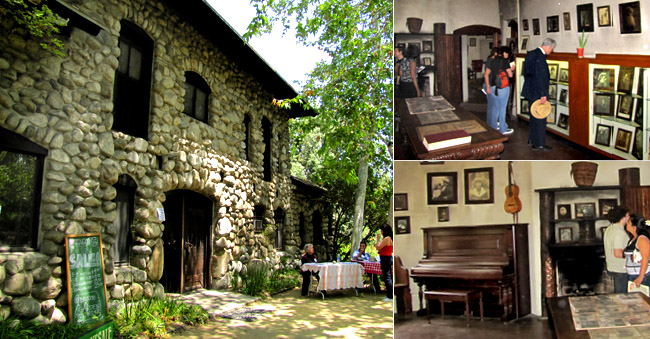 The Lummis House Museum is one of several historical museums and houses along the Arroyo Seco area of Los Angeles. The crowning glory of these museums is Heritage Square with a number of historic houses and buildings in one location that looks somewhat like a town square.

Lummis House was built over a period of 13 years by Charles Fletcher Lummis in the late 19th and early 20th centuries. The 4,000-square-foot Rustic American Craftsman-style home is built of river rock with concrete flooring on an exhibition hall, giving it a cold, somewhat stark appearance inside. The space is converted to a museum with wall and table displays, plus a few furnishings and furniture groupings such as a piano and musical instruments.

John Lummis said he installed concrete as a practical matter for ease in cleaning after the number of parties he hosted. Guests at his property included Will Rogers, John Philip Sousa, Clarence Darrow and John Muir.

Charles Lummis (1859-1928) was known for many talents and trades. He was an author, editor, poet, librarian, historian, archeologist, athlete, and the list went on. His circle of friends and associates who he liked to throw parties for included musicians, literary figures and political figures he knew from his wide-ranging jobs.

Operated by the City of Los Angeles Recreation and Parks Department, the property is designated at California Historical Landmark NO. 531.

Museums of the Arroyo (museumsofthearroyo.com) is an annual event that invites the public to tour Lummis House, The Gamble House, Heritage Square, Los Angeles Police Museum, Pasadena Museum of History and The Autry's Southwest Museum Mt. Washington Campus. This event has been held for more than 30 years, providing a great opportunity to see the area's museums all in one day (if you don't stay too long at one place.)