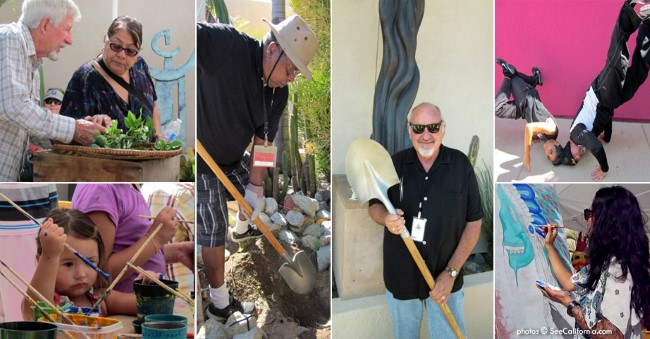 Shovel Made From Firearms at Museum of Latin American Art

Shovel Made From Firearms Used to Plant Tree at Museum

Long Beach, California -- A shovel made out of recycled metal from firearms was used to plant a tree during "Neighborhood Appreciation Day" at the Museum of Latin American Art (MOLAA) in Long Beach recently. "Palas por Pistolas" (shovels for guns) was a project by Mexican Artist Pedro Reyes involving turning 1,527 firearms into shovels. The guns and rifles were voluntarily turned into the government by citizens of Culiacan, Sinaloa, Mexico. Each shovel is being used to plant trees from France to Canada to the United States and beyond.

"We're honored that Pedro Reyes gave us a shovel," said Stuart Ashman, President and CEO of MOLAA. "What beautiful symbolism to transform guns into something used to create and build constructive things."

Ashman helped plant an ocotillo tree in the museum's Sculpture Garden with the special shovel. There even was a video playing, created by Mexican Artist Rafael Ortega, which showed how guns were melted down and became shovels.

The MOLAA "festival" also had excellent singing and dancing by children and a Homeland Cultural Center performance that spellbound the crowd.

The popular center athletes put on a "breaking" demonstration, featuring Don Sevilla, "Mike-the-Iceman" and others. They popped (backslid), locked (wrist-rolled and leaped) and spun like tops to the delight of the spectators. (They teach "breaking" at the cultural center in MacArthur Park, 1321 E. Anaheim St., Long Beach on Mondays and Tuesdays from 6 to 10pm, according to Sevilla, who can be reached at don@urbanartsoutreach.org)

"Mike-the-Iceman" has been "breaking" for over 31 years and really enjoys "turning kids around," leading to a more peaceful world.

Over 400 people came to the "HOLA MOLAA" day, which also included demonstrations by Footscape Long Beach, a not-for-profit that builds and maintains food gardens on your property (foodscapelb.org); the City of Long Beach, showing how to compost (longbeach-recycles.org); Sole Searching, promoting healthy and active lifestyles (SoleSearchingLB.org) and others. (We'd like to salute Target for sponsoring "Target Sundays." Every Sunday, there is free admittance to MOLAA, Thanks to Target! Find more out about MOLAA at molaa.org.)