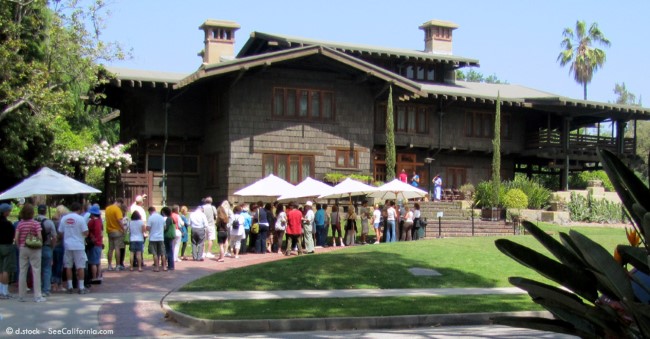 Who could imagine that a short distance from the 210 Freeway in Pasadena is a world so opposite 21st century traffic congestion that you surely must have entered a time warp? A beautiful place exists in Pasadena where historic homes on graceful tree-lined boulevards showcase another century in which designer houses were built to last and and few people owned a car, just yet.

When the Gamble House was built in 1908, it would 12 years before cars would begin lining driveways abundantly in this Los Angeles County neighborhood (city) northeast of L.A. By 1920 the U.S. population was around 106 million and roughly 23 million Americans owned an automobile.

Tourists are free to drive local streets and see unique-looking Green & Green architecture but the great news is that The Gamble House on Westmoreland Place is actually open for touring. In 1966, the Gamble family turned the house over to the city of Pasadena in a joint agreement with the University of Southern California School of Architecture. The Gamble House was declared a National Historic Landmark in 1977.

The American Arts and Crafts style architecture and furnishings were designed by Charles and Henry Greene in 1908 for David and Mary Gamble of the Procter and Gamble Company. The prominent family left the Midwest and established themselves in Southern California in this richly decorated home, built with the finest materials and craftsmanship, even by today's standards.

Renowned Pasadena architects Charles and Henry Greene worked closely with David and Mary Gamble to create a winter- escape home they would enjoy, far from Midwest blizzards. Led by Scandinavian craftsman woodworkers Peter & John Hall  used 17 species of wood in the house and furnishings that today are recognized as one of the greatest achievements in American architecture and craftsmanship.

The Gamble House was such an ideal place, David and Mary Gamble lived there until their deaths in 1923 and 1929, respectively. Custom-designed furniture for the house remains in it on view.

When you visit, take a tour or drive around the historic Arroyo Terrace neighborhood to view this National Register historic district, home to nine Greene & Greene houses as well as the works of other noted architects such as Myron Hunt, Edwin Bergstrom, Elmer Grey, and D. M. Renton. Among the houses are the personal residences of Myron Hunt and of Charles Greene, who added to his house over a number of years as his design ideas evolved.

For those on a budget, it is possible to park your car and wander The Gamble House grounds for the Brown Bag Lunch events, or the free museum open house days.