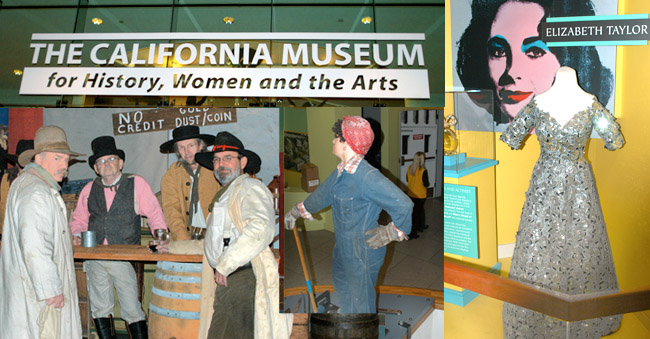 The California Museum has changed since it first opened. In addition to changing to its current name, the focus slightly shifted so that it now offers exhibits, a Hall of Fame with names such as Lucille Ball, Maria Shriver, Charles Lawson, Walt Disney, Clint Eastwood, Amelia Earhart, John Muir, Sally Ride and countless other celebrities, pioneers and movers & shakers awarded this honor by the California Governor.

Constitution Wall towering six stories high in the courtyard,  inspires freedoms guaranteed to Californians through a display of sculpted words taken from the California Constitution.

Gold Mountain explores the Gold Rush and tells the stories of Chinese immigrants who came to America in search of a better life.

The Promise is a 70 foot mural created for the Museum  opening in 1998.  The mural by artist George Yepes depicts California history with a variety of symbols--legendary Roman goddesses, the grizzly bear (official state animal,) stars to acknowledge California's place as the thirty-first star on the U.S. flag and much more.

Uprooted is an exhibit documenting Japanese Americans relocated to detention camps, including Manzanar and Tule Lake in California.

California Indians is a display of artifacts, original art, oral histories and an interactive language kiosk chronicling the histories and cultural legacies of over 100 tribes. Baskets woven by Native artists, a fur cape owned by Ishi and artifacts seek to tell the stories of Natives in the own voices.

California Missions take an historical look at the founding of the first mission in San Diego to the last, Mission San Francisco Solano, in educations displays that provide great material for grade school students to adults.

The California Museum was founded through a unique partnership with the State of California as a private non-profit institution focused on California history and culture. It opened on Sept. 9, 1998 as the public showplace for contents of the the California State Archives.