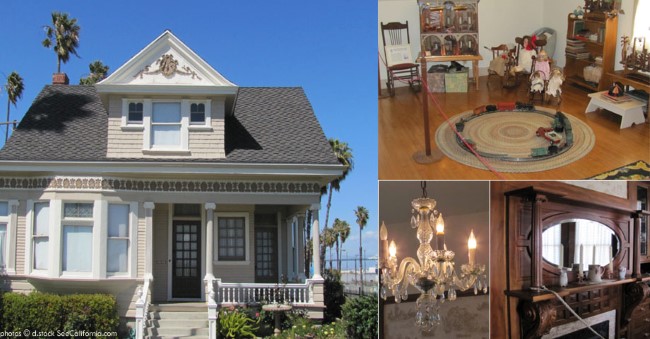 Recently I went on an fascinating tour of The Muller House Museum & Gift Shop at 1542 South Beacon Street, San Pedro. This former residence of shipbuilder William Muller is incredible because it sits on a hill overlooking the ships arriving and departing from Los Angeles Harbor and the Port of Los Angeles. It has an amazing history, along with that of its owner.

Born on an Arabian horsebreeding ranch in 1865, Muller avoided being part of the Kaiser's Army by stowing away on a freighter, where he existed on tomatoes in the hold. Muller was discovered by a ship carpenter, who taught him how to work with wood.

He jumped ship in New York City and went to work building vessels in 1886. He later sailed around Cape Horn to California where he ended up working for William Banning, designing and building excursion boats. He also built nine stage coaches for the Bannings to use on Catalina as well as the first tugboats used in the harbor.

She gave us a neat room by room tour of the home and said it has been moved twice before its current spectacular spot.

Muller purchased it in 1901 and when Front Street had to be widened, he relocated it by mule and wagon to 19th and Grand. He added 12 feet to the rear of the house, making a service porch, downstairs bath, and an enlarged bedroom. He also created a sun porch , which he used as an office.

The home was eventually donated to the society, moved to its current location on land leased from the City of LA, and opened to the public in 1990. Inside it has wonderful furniture and relics of years gone by.

The San Pedro Bay Historical Society has rummage sales several times a year to raise money for house maintenance and also sponsors sensational programs with speakers like Art Almeida on "Bloody Thursday and The Labor Movement" and Steve Cole "Love & Lumber: The Diary of a Ship Captain's Wife.

Find out about these and other speeches by logging on to sanpedrobayhistoricalsociety.org. If you'd like to tour the incredible house, it's open every Sunday from 1pm to 4pm (confirm before going!) I know you'll really enjoy the jaunt through it. San Pedro Bay Historical Society President Frank B. Anderson and his team of volunteers do a wonderful job keeping the Muller House and its history alive.My thanks to them.