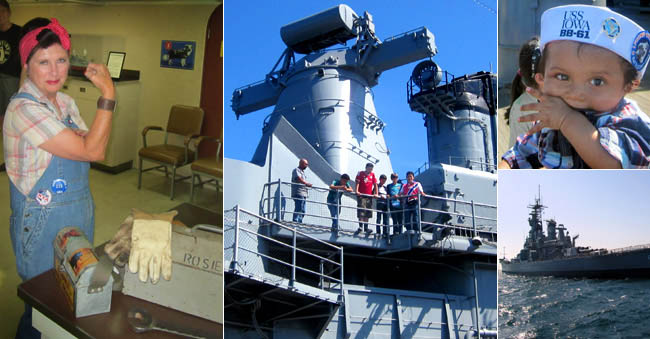 USS Iowa - A Spectacular Place To Visit Again and Again

San Pedro, CA--Every time you visit the USS Iowa Battleship you learn something new. I visited it on Memorial Day and learned that the US Naval Battleship era was 1896-1995. During that period, no US Navy Battleship was ever sunk by an enemy at sea. Fortunately, America has preserved 8 battleships, the Iowa being the last one saved from being scrapped. Some other countries have scrapped all their battleships but USS Iowa Curator Dave Way, and his colleagues, are doing all they can to preserve the past as well as excite and educate the next generation about the important role battleships played.

The famous ship, which served in World War II, the Korean War and Cold War, can be seen more in-depth than every before. The Flag (Admiral) Bridge has been opened for viewing, along with the XO (executive officers) Quarters. You can now see a sample of the sailor's sleeping area. There's a new temporary display, The Home Front, which shows what families in World War II were going through and how they lived.

"We're developing a new Sleep Over Program for scouts and youth groups where they can really get a feel for the ship by staying overnight," Way said. The enthusiastic researcher is creating a very special 4-hour "Curator's Tour," where he'll take you to areas not on the other tours and even show you slides of what's in places you cannot venture.

One of the best new things I saw on the ship were graphic illustrations and information, which simply explain what guests are seeing. Many visitors probably know little or nothing about Naval ships and the graphics are tremendous and help a lot. Some are called, "Who and What's Inside." So, even if you can't see, they explain what's there.

Exciting new periodic "canned ship announcements" and "bosun''s pipe whistles" are heard aboard the vessel. These really enliven your experience and give you a feel for what the sailors heard aboard the ship. The high pitch whistle was first used to pass commands to the crew when a voice could not be heard. It's now often used in "bugle-type" calls for Evening Colors at Sunset and other ceremonial things.

Hollywood also is bringing its own sounds and cameras to film action aboard the USS Iowa. The ship, which has hosted three US Presidents (Franklin Delano Roosevelt, Ronald Reagan and George H.W. Bush), is now a popular place to film movies and TV series. Among the hit productions to use the only battleship on the West Coast for filming are "NCIS: Los Angeles, "The Last Ship" and "Jeopardy." (If you're interested in filming there, contact Jonathan T. Williams, President and CEO of the Pacific Battleship Center at 877-446-9261, ext. 709 or marketing@Iabattleship.com.)

Speaking of Jeopardy, the Iowa was constructed with 1,135,000 rivets and holds the record for firing the longest ranged 16-inch projectile at 26.9 miles in 1989.

There are 2,000 volunteers, including 300 who are particularly active. Of these, 150 are military veterans from World War II through the 1980s. Serving his first day as a volunteer in security, a thrilled Darrell Adamson, who served on US Navy ships from 1957-60, said, "I really wanted to get back on a ship. It's been almost 55 years. It's such an honor to serve again."

Built in 1940 at the cost of $110 million, the Iowa was launched as the "World's Greatest Naval Ship" because of her huge guns, accurate fire control systems, heavy armor, and fast speed (33 knots or 40 mph). The 887-foot vessel had 20 years of active duty and 50 years in the Naval Reserve Fleet. It was decommissioned in 1990 and awarded to the non-profit Pacific Battleship Center in 2011. The Iowa was opened to the public on July 7, 2012 at the Port of Los Angeles, 250 South Harbor Blvd., San Pedro (located at Berth 87 off 1st and Harbor). The amazing thing is that it still could be called back to active duty through 2020!

Come and see it with your family. If you've seen it before, you'll enjoy seeing it again because of the new areas opened up, new displays and especially getting to talk with the military vets. CEO Jonathan Williams said the best thing about his job "is the people. Getting to hear their stories helps keep it alive."

It's open 7 days a week (except Thanksgiving and Christmas) and has an incredible Gift Store with all sorts of unique items. For hours and further information go to pacificbattleship.com or call 877-446-9261. Ship Ahoy!