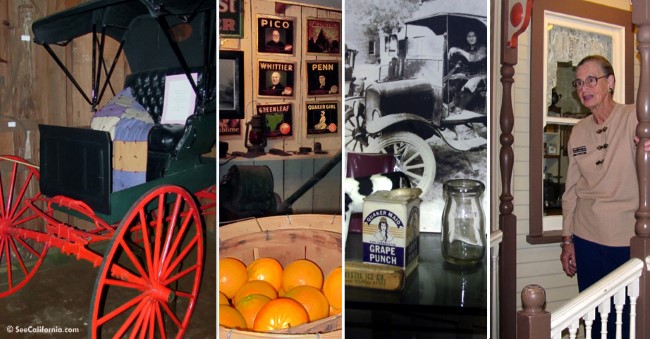 Hours: Open from 1 to 4 p.m. Saturdays and Sundays, call before going. Note that exhibits mentioned in story may change.

Whittier, CA--The Great Harry Houdini's Handcuffs, the desk of a local attorney (who would become President of the U.S.), a winning Indy Car exhibit and a model Oil Derrick used in the Clark Gable Classic Movie, "Boomtown," are just a few of the sensational displays at the amazing Whittier Museum.

A special museum exhibit, "Behind Smoke and Mirrors," is a fascinating visual display chronicling highlights of the History of Magic and Illusion. Artifacts, posters, costumes, magic memorabilia and more are in the Society of American Magicians Hall of Fame and Magic Museum (temporarily displayed on the second floor). Included is a special Houdini exhibit that you'll find interesting. The office desk of Whittier attorney and future President Richard Nixon, which he used in the Bank of America building, also is on display. Another incredible display is on George Salih, who built the winning Indy 500 cars (1957 and 1958), in the garage of his Whittier home. He worked as foreman for Meyer-Drake, the producer of the Offenhauser engine that dominated the Indy 500 for three decades, winning 24 races. Salih came up with the revolutionary concept of turning the car's engine on its side, achieving a lower center of gravity.

The museum also features a 7 1/2-foot oil derrick model that was featured in the MGM movie, "Boomtown," starring Clark Gable, Spencer Tracey, Claudette Colbert and Hedy Lamarr. The derrick was made to look on camera like a real 90-foot wooden rig. (Filmed in Whittier were "Back to the Future," "Tarzan" and the popular "FBI" TV series, which used the same Bank of America building, Philadelphia and Greenleaf Streets, where Nixon once worked.)