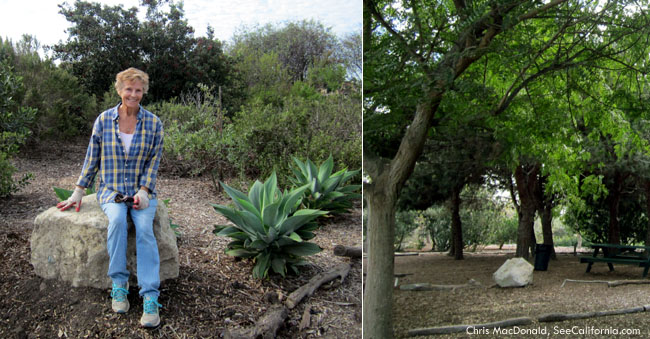 Over 100 tons of Lion Country Safari's beautiful white sandstone breccia boulders are now being used to beautify Huntington Beach's Shipley to Shore Trail, passing through the iconic HB Urban Forest, off Ellis between Edwards and Goldenwest. 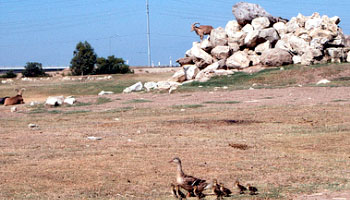 The boulders, which for 14 years decorated the world famous Lion Country hippo pond in Irvine, were purchased and transported to the Urban Forest area for $4,000, according to Jean Nagy, President of the Huntington Beach Tree Society. They had been on land used by West Coast Arborists, who moved from their location near the old wildlife park.

"There's so much history in these spectacular, boulders, which each seem to have their own shape and personality," Nagy said. "They wanted them to go somewhere where they really would be appreciated."

The HB Tree Society, a non-profit made up of volunteers, has beautified Huntington Beach with more than 5,000 trees and other natural plants and decor since 1998. Volunteer Dwight Dodd of Schmidty's Garage has helped move the boulders to various locations using a bobcat.

"The boulders are perfect for the Shipley to Shore path we're developing from Shipley Nature Center in the north end of Central Park through the Urban Forest Area, across Edwards behind the Fire Station, along Overlook Park and Harriett Wieder County Regional Park to the Pacific Ocean. It will be one of the most incredible paths in California, offering sensational, panoramic views of Southern California and the breathtaking sunsets."

Nagy said the historic boulders, some of which are thousands of years old, really help provide a wonderful "mountainy" feel to the path, park, hills and forest.

Horseback rider Teri Tucciarone said she loves galloping through the area. "The new boulders that have been placed all around make me feel like I'm riding in the mountains. They're really pretty and add a lot to the trails," said the First Team Realtor, whose horse is "Cowgirl Barbie."

For 14 years, the boulders were featured landmarks in the famous 100-acre African-themed drive-through park that closed in 1984. It featured lions, ostriches, giraffes and other wildlife. The land became Wild Rivers water park, then the home for many apartments.

Nagy, a former Peace Corps volunteer, said she'd love to see a campground and amphitheater adjacent to the Urban Forest. "It's such a fantastic location—a real jewel--that will be much appreciated someday. We're looking for a sponsor to help make that happen," she said. "There's so much tremendous Native American history right here. We want to be able to tell that history as well as the significance of Lion Country's boulders."

The Urban Forest, located on city land, is one of the most beautiful passive park's in California. It features native plants and trees, migratory birds and butterflies, and is maintained by the Tree Society as well as hundreds of volunteers from high schools, Boy and Girl Scouts, local businesses, the city and others. If you would like to help in its development as a sponsor or volunteer, contact the HB Tree Society at 562-760-0733 or HBTrees.org. For those of you who haven't yet seen the peacefulness that it has to offer, stop by and check it out. You'll be amazed!