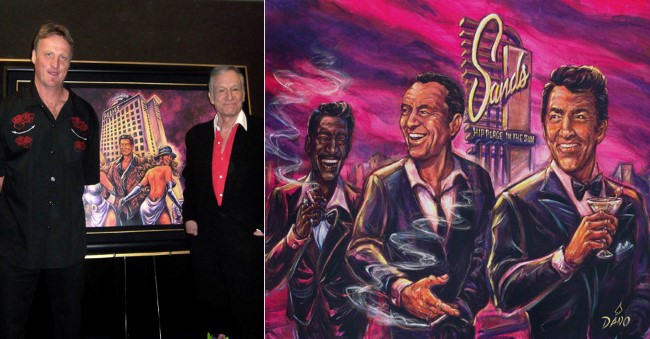 Hollywood,CA-When you look at a Dan Chris Kubat painting, it's a thrilling, memorable experience. You feel like you're standing next to James Bond in a tension-filled room or enjoying the blare of Miles Davis' horn or wondering what's going on in Clint Eastwood's head at a poker table or tasting salt spray as you catch a wave with the legendary David Nuuhiwa.

The Czech Republic-born artist captures the celebrity's spirit (and what draws us to it) in his amazing, larger-than-life artwork. "I try to capture the moment in an old Classic Style illustration," said the friendly fellow. "I do a lot of research on my subjects, then paint in the technique of top illustrators from the 1960s and 1970s, like Robert McGinnis (James Bond) and Robert Williams (underground cartoonist)."

Kubat's paintings combine storytelling and cinematic styles, capturing imaginary moments in time. They each have their own "Wow!" The Laguna Hills resident "nails it" because of the talent he developed over years as an artist for Disney, DreamWorks, Universal, Warner Brothers and MGM. He won an Emmy for his art on Nickelodeon's award-winning, "Back at the Barnyard" series.

The versatile guy has more than 15 years experience in animation as a director, designer, digital and traditional storyboard artist. All of his oil paintings have unique color schemes, where he highlights particular shades to capture realistic moods in an imaginary scene. His skill for placing the mood in the exact moment, will warm you like Ray Charles' smile. And you'll swear you even hear Ray's music, while gazing at the painting.

Check it out for yourself at http://www.artbydano.com/ or visit Peter's Landing Farmers Market, 16400 Pacific Coast Highway, Huntington Beach on Saturdays from 9-2. The famous painter sometimes visits his booth to autograph art."