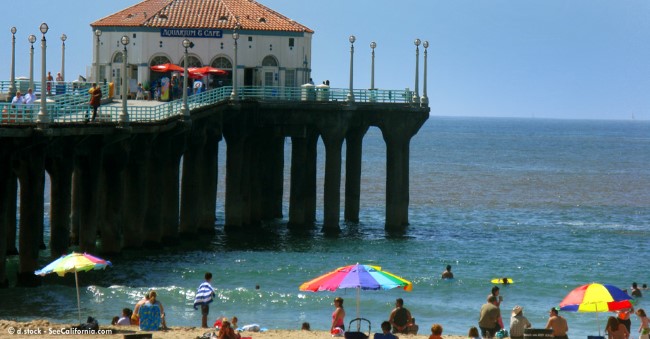 Special events in Manhattan Beach include volleyball and surfing tournaments, Sunday afternoon concerts in Polliwog Park during the summer months and many special events. Old Hometown Fair, Holiday Fireworks Festival, International Surf Festival and many more events fill a busy calendar for residents and visitors to participate in or watch.

For those born to shop, Manhattan Beach has many eclectic, one-of-a-kind shops & boutiques ranging from couture to grunge, surf and beach wear to "out there". Of course you'll also find major department stores and shopping malls in the surrounding areas such as Torrance and Redondo Beach.

The newest television and film production facility in Southern California, Manhattan Beach Studios, is the first studio built from the ground up in California in 60 years. The 550,000 square foot project consists of fourteen art deco sound stages, office space, and related facilities. The first phase is complete and is being leased by 20th Century Fox, with the TV show "The Practice."

A brief history of Manhattan Beach- In its earliest days, Manhattan Beach was part of the ten-mile ocean frontage of Rancho Sausal Redondo, which means "Round Clump of Willows." At one time the area was called "Shore Acres" by George Peck, who owned a section of the north end of town. In 1901, Stewart Merrill bought the south portion and called his section Manhattan after his old home, New York City. Peck and Merrill, unable to agree on a city name, flipped a coin and Manhattan won. The first downtown building was built by Merrill around 1901, a small frame building later used for city offices. The official date of incorporation was December 2, 1912 and endorsed findings were filed December 7, 1912. Planks were laid in the sand on Manhattan Avenue for vehicles and along the Strand and side streets for pedestrians.

Two wooden piers were build in 1901, one at Center Street and one at Marine Avenue. The Center Street pier supported a wave motor to generate power for the Strand lighting system. Purportedly, part of the wave motor lies buried in the sands at the shore end of the present pier. The next pier was built on the same site and extended about 922 feet into the ocean. Engineer A.L. Harris developed the concept of the circular end for less exposure and damage to the pilings by the waves. The pier was completed and dedicated on July 5, 1920.

After World War II a large influx of people came as a result of the desirability of the area for year-round living. Servicemen visiting during the war returned to live here. The development of the defense industry brought many people to the South Bay to reside and work. Much of the land east of Sepulveda was developed to house the influx of people.

Where to stay: Manhattan Beach hotels number a modest sum of less than 10 at the time of this writing. Shade Hotel is the luxury boutique hotel a short distance to the beach. Manhattan Beach Marriott offers comfort that the chain is recognized for and also is one of the top hotels. People like it because it reflects the stylish life that LA and Manhattan Beach are

Manhattan Beach is one of the South Bay beach cities in Los Angeles County. The South Bay is an area, part of a natural land formation creating a distinct bay that is home to Manhattan Beach, El Segundo, Hermosa Beach, Redondo Beach and Torrance in the southern portion of the Santa Monica Bay.