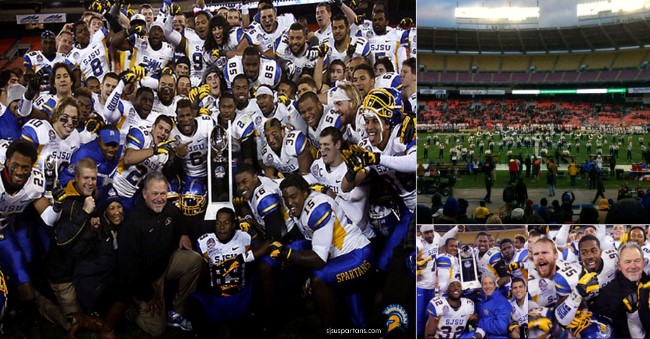 Washington, D.C.--Everyone seemed to count out San Jose State's chances in yesterday's Military Bowl, except for the Spartan team and what was left of its coaching staff. It's head coach left a practice earlier this month to become head coach at Colorado. Rumors indicated that the Spartan's interim bowl coach and defensive coach also would be leaving to join Colorado after the game. Perhaps some other coaches might be leaving as well. Even the team's local paper predicted they would lose to their bowl opponent, defense-juggernaut Bowling Green.

So much for distractions to the remarkable, focused San Jose athletes. (In fact, there should be a NCAA Rule that coaches should not be allowed to leave a team until after a Bowl Game. There were several other major colleges, who lost their top coaches prior to bowl appearances this year. It's just not right for the student athletes, who put everything on the line for their coaches.) Bravo to SJS players for putting all this confusion aside to focus on achieving one last season victory, a victory that would give SJS it's best major college football season in over 70 years! 11 wins and 2 loses (one of which was only by 3-points to powerhouse Stanford University).

Amazingly, just two years ago, SJS had only 1 win and 12 losses! What a turnaround. Credit the coaches and their game plans and instilling a Spartan attitude and pride in the players that they could win under any circumstances. They would need to believe in themselves and their team going into the nationally-broadcast Military Bowl, even with their impressive #24 national ranking in three major football polls.

They needed the skills of the nation's most accurate passer, junior college transfer and first year Spartan David Fales, who fought off 20 mph winds in the first half, on his way to completing 33 of 43 passes for a record 395 yards, which earned him game MVP honors. Fales gave credit to his ends, his defense and the rest of the team "for their resiliency." They kept fighting back (but isn't that what Spartans do?). Four times the lead changed in the second half. Their punter had to leave the game early, so Field Goal Kicker Austin Lopez assumed the punting duties as well.

The SJS defense forced Bowling Green to punt 8 times and came up with a key fumble recovery. They also got their first punt block of the season. WAC Defensive Player of the Year Travis Johnson was sensational, even sacking the quarterback, forcing a fumble. One player after another stepped up to contribute. Ends Kyle Nunn and Chandler Jones scored touchdowns; sure-handed Noel Grigsby, Jabari Carr, Ryan Otten and Tyler Ervin made major contributions, as did the offensive and defensive lines. This was a team that believed, that kept coming back.

They had upsets all season long, beating Bowl-bound teams like Navy, Brigham Young and San Diego State. What they did beating Bowling Green 29-20 in RFK Stadium should give the talented athletes even more confidence and determination as they enter the Mountain West Conference next year, with a new coach and several new assistant coaches.

Like their neighbors, The San Francisco Giants, who also came in under the radar to win the World Series, San Jose State Football has proven it can compete with anyone, anywhere, anytime. The Spartans have a champion mentality. Although other schools might get more publicity and usually have much larger football budgets and facilities, always remember that SJS--California's oldest public college (1857)--produced legendary Super Bowl Winning Coaches like Bill Walsh and Dick Vermeil. SeeCalifornia.com salutes the Spartans for overcoming adversity and for their spirit, heart and fierce competitiveness--factors which have always helped make "The Golden State" golden!