Granada Hills, CA Things to Do 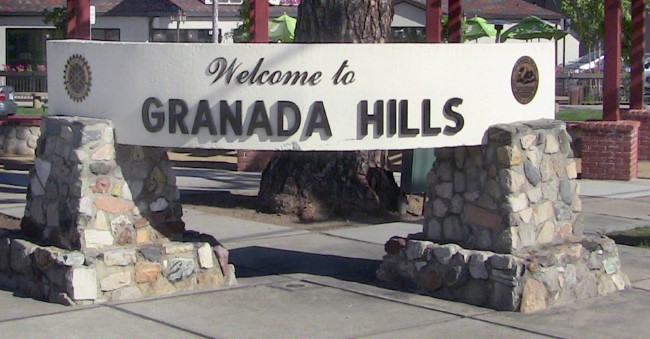 Located in San Fernando in the County of Los Angeles, Granada Hills is named for its hilly location 1,000 feet above sea level and the nearby Pacific Coast. North of North Hills and Northridge, west of Mission Hills and Sylmar, and east of the Porter Ranch, the distinct neighborhoods with their own houses, businesses and flavor make up this vast portion of the City of Los Angeles that stretches miles beyond its City Hall in downtown L.A.

A pioneer of the area, George K. Porter, helped found this San Fernando Valley location of Granada when it was a farming region ideal for beans and wheat before the turn of the 20th century.

San Fernando Valley struck oil in 1916 with an oil well located at the northern tip of Zelzah Avenue. An oil investor attracted by word of the rich land and sunny lifestyle came from Oklahoma to build Sunshine Ranch complete with dairy cattle, barns and much acreage. His property was eventually sold and the region that became known as Granada was promoted as a rabbit raising colony! People were given free trips from nearby Los Angeles to visit and see the place featuring 80 houses equipped with barns suitable for rabbitries, circa 1927. Granada Hills was founded in 1927 as Granada and 15 years later in 1942 the "Hills" portion was added to the name.

One baby was named Granada Klissner and was presented with $25 worth of stock in the Granada Mortgage Co. as a reward for being the first child born in Granada. A business district, Granada Women's Club, a school, Granada Chamber of Commerce, and many other organizations and businesses began to grow the town into a city in just a few short years.

After the earthquake of 1933 devastated Long Beach located in southern Los Angeles County, school bungalows from Granada Hills were moved to Long Beach and Venice to replace school buildings destroyed there.

The future of Granada Hills is assured because of its location 1,000 feet above sea level and the prevailing air currents which make it one of the few smog free and virtually frost-free communities in this area.

Granada Hills claims to fame include:

First visit to U.S. by Soviet leader Nikita Khrushchev on September 19, 1959. Because of security issues, he was unable to fulfill his dream to see Disneyland in Anaheim, but instead was taken to see a typical Southern California neighborhood—Granada Hills.

Eichler architectureis prominent in Granada Hills, filled with mid-century modern style homes in Balboa Highlands, a housing tract designed by architect Joseph Eichler. Many other areas of Granada Hills feature houses with pitched roofs and beam ceilings. Be sure to take a drive around Knollwood golf course to the east of Balboa and Knollwood Grove to the west of Balboa behind the Eichler tract.

Movies & Film:Granada Hills has been the ideal location for many popular hit films and shows. Here is only a small sampling of productions where you were actually watching places in Granada Hills:
Knots Landing took place on Crystalaire Place which is in reality, Knollwood Country Club Estates
The Handler TV series episode Jar of Spiders with Lou Diamond Phillips
Fast Times at Ridgemont High's pirate hat scene with Judge Reinhold was filmed on Chatsworth Street
My Name Is Earl is frequently filmed in Granada Hills
E.T. the Extra-Terrestrial includes one notable scene filmed on White Oak Avenue between Chatsworth Street and San Fernando Mission Boulevard.
The 40-Year-Old Virgin's final musical segment, Age of Aquarius, was shot near O'Melveny Park in Granada Hills
Scrubs episode where J. D. went to see his girlfriend at another hospital
The Lost World Jurassic Park where the Tyrannosaurs Rex goes into a backyard of a house is filmed in Granada Hills