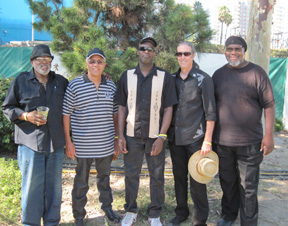 Other delicious food included roasted corn, hot sausage, barbecue sandwiches, fresh squeezed lemonade, and a full bar for the adults. But the most amazing thing to watch was the massive production of lobster being cooked and served by Bristol Farms. Two special copper-coated tanks, built specifically for cooking the creatures, allowed everyone to see the amazing process from start to finish. 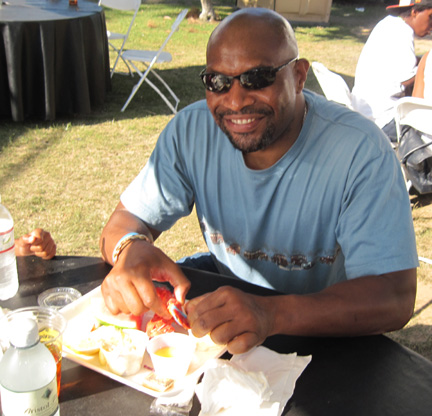 Thank you to the fabulous sponsor: Bristol Farms, Sierra Nevada, The Varden (A Boutique Hotel), Direct TV, Long Beach Boat Show, 95.5FM KLOS Radio, OC Weekly and LA Weekly. I recommend this event. If you'd like to get involved in next year's 2011 Lobster Festival, please contact (562) 495.5959.

Photos:
1. Reggie Harrison who is The Deputy City Manager of Long Beach eating Lobster.
2. It's The Bonne Musique Zydeco Band that played at The Festival.