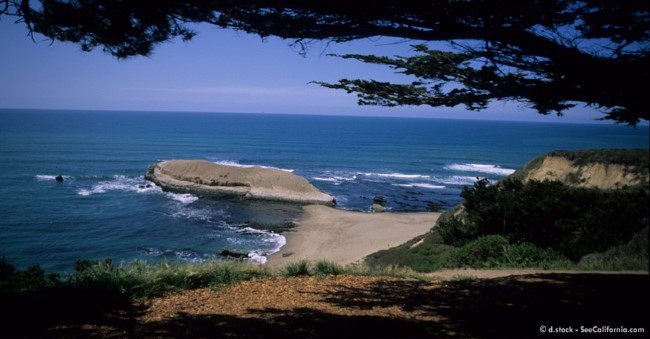 You just never know what strikes the human imagination, and what someone sees in a rock. Pet rocks created a craze that made someone rich. California's got rocks, and some are really famous-Morro Rock and Alcatraz Island are several rocks that people go the distance to see. But Greyhound Rock in Santa Cruz County is a lesser known, but equally interesting rock for those who love to walk on rocks. The huge rock formation that extends into the ocean has flat enough surfaces that people can walk on and gaze out at the spacious sea. Sometimes you'll see dolphins in the distance, or even migrating whales.

Greyhound Rock Beach is lesser known than nearby destinations in Santa Cruz County parks system. It's often a quiet place located just north of Davenport where all the kiteboarding and windsurfing goes on. There's public parking, picnic areas, a pretty beach, and trees offering some shade. In 2007 the Greyhound Rock area was made part of the Marine Protection Act, which means that you are not supposed to pick up any natural objects on the beaches and take them with you when you leave. The next time you take the coastal drive along Highway 1 in the Bay Area south of San Francisco, do look for the signs north of Santa Cruz and pull over to check out Greyhound Rock. -scparks.com