Actress Gillian Zinser on Location for 90210 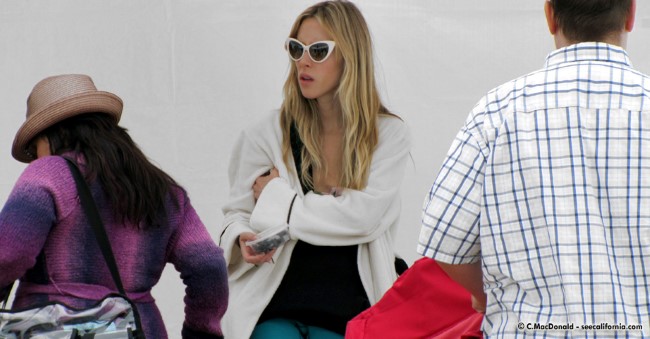 Pictured is actress Gillian Zinser at Bolsa Chica State Beach in Southern California. She plays a young California surfer named Ivy Sullivan on 90210. In February 2010, she was signed as a regular cast member for the show. Prior to 90210 she appeared in Southland, Cold Case and Cupid. In 2011 Zinser stars in her first feature, The Truth Below.

The glitz and glamour of Hollywood graced beautiful Bolsa Chica State Beach recently as a television episode of "90210″ was recorded for the new season. Dozens of people, from the stars to their backstage supporters, spent hours following the director's commands on the beach, where an impressive set of Game Booths were built just for this filming.

"We're delighted to have this big production here because it shows the beauty and promotes Sunset Beach and provides the state much-needed revenue at the same time," said State Lifeguard Peace Officer Ryan Gates, who oversaw the filming. "We're fortunate they shoot some segments at our beach."

Produced by CBS Television Studios for the CW, "90210″ is in its fourth season, following a group from West Beverly Hills as they navigate life after high school. The show has also used Huntington City Beach, Huntington Beach Hyatt Regency Resort and Spa, and other local spots in its productions.

What locations haven't been used for filming in California? Not many. When you travel throughout the state, just ask locals if any films have ever been produced on location there. Most often, the answer is "yes". Some cities and beaches have become ambivalent to film productions as they disrupt traffic patterns, especially in Los Angeles where filming is common. When the movie industry began leaving California in recent years for cheaper on-location spots, Hollywood and California began re-thinking its attitude, and started asking production companies to come back to California. 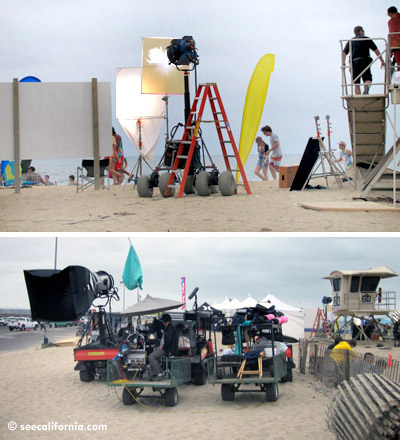 Don't be surprised when you travel throughout the state and see cameras, lights and celebs. California still wears the hat as the movie capital of the world.