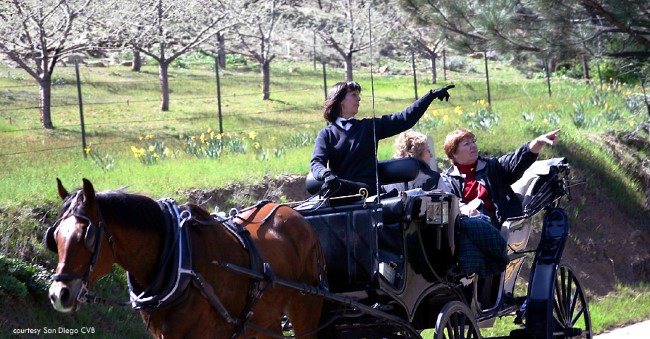 How would you like to be dashing through the "snow" covered blossoms in a one horse open sleigh? Over the hills we go, laughing all the way, ha ha! The white "snow" blossoms are part of California's fruit bearing tree season, and one place you can take such a ride is charming Julian (shown in photo.)

California could have been called the apple capital less than 100 years ago. But irrigation and water costs have caused some apple areas to dry up, while building development also replaced farm lands where you once could see a sea of apple orchards, orange and lemon groves. Today, there are some pockets of apple orchards and regions that continue to produce the "healthy" fruit. No matter where you are in California, there's usually an orchard you can visit within a half a day's drive.

According to California Apple Statistics, the state ranks as the 2nd largest exporter of apples in the United States- 70% of apples produced are shipped domestic with the remaining 30% exported to 60 countries such as Canada, Mexico, Taiwan, and the United Kingdom. With over 25,000 acres of land dedicated exclusively to apples in the state, California specializes in four varieties: Gala, Fuji, Granny Smith, and Cripps Pink Ladies, shipped July to December.

In the places where you'll find apples today, several have discovered a crafty way to sustain the local eco-tourism ventures by producing special events to celebrate the local harvests. A symbiotic relationship between local hotels, towns and apple orchards help promote the industry, its sales, and interest in sustainable foods and practices in California. We're compiling an apple page dedicated to California apples.

Apple Butter Festival at Riley's at Los Rios Rancho (Yucaipa / Oak Glen) November 25 - 27, 2011 includes the Apple Hoedown. Apple Butter Festival Pioneer families made a custom of gathering together in late fall to cook up apple butter from the last apples of the season. It was a practical way to preserve the apples throughout the year and a pleasurable way to preserve community spirit. Families are invited to share in it with hands-on demonstration of apple butter making the old-time way - outdoors in a big copper kettle. "Start the snitz" and "add the money", plus enjoy pioneer crafts and games, music, carriage rides, and more. The evening is capped off with a good old-fashioned hoedown, featuring music by Rileys Mountaineers. Admission to the Festival is free; there are small fees for some activities. Apple Butter Hoedown admission of $25, $18 kids, includes the pumpkin stew, served up in large Cinderella pumpkins. (losriosrancho.com)