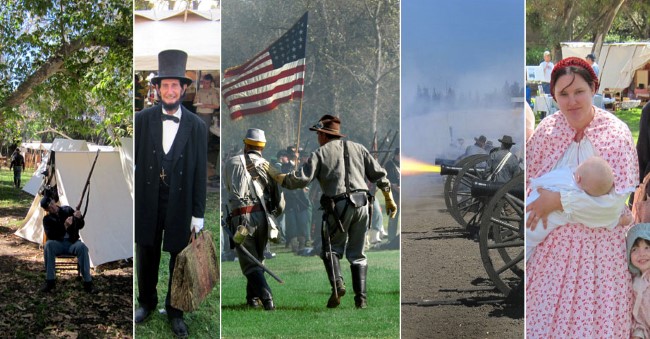 The 150th Anniversary of the War Between the States was celebrated in grand style in the largest Southern California re-enactment of its type before thousands of excited spectators and participants in Huntington Beach’s Central Park recently.

Battles (complete with soldiers from the North and South advancing and retreating amidst cannon and rifle fire), Medical and Weapons Demonstrations, a Concert (featuring the Armory Band), a Dance, Church Services, and a special visit by President Lincoln (delivering his famous Gettysburg Address), provided much entertainment and education for a steady stream of visitors, who literally stepped back in time. Numerous vendors offered authentic Civil War clothing & artifacts, legendary Disney Silhouette Artist Bob Carlson created keepsake portraits and representatives from the Drum Barracks Civil War Museum in Wilmington spread the word that the Civil War is alive and well in California!

Seeing all the re-enactors in period costumes in their respective Confederate and Union camps, and in the civilian town of Reedsburg, really brought “life” and an instant understanding of the way it was in the 1860s.

Witnessing families cooking over open fires, sleeping in tents, complete with quilts and other period gear was incredible to see. The expressions on all the participants'faces, young and old alike, would have been worth the price of admission, if the popular event had not been free.

Thanks to the Huntington Beach Historical Society and its members, especially Kelly Rivers (Society President and Civil War Days Chair), her mom, Maureen (founder of HB Civil War Days 20 years ago), her son, Darrell (Society VP, a true character “out of Central Casting” and a well-known re-enactor), husband, Ben, and all the dedicated living historians for putting on such a superb event which helps us understand our past.

Several of these same re-enactors were featured in the TV Show, “Family Tree,” in 2013. Darrell served as a consultant for the acclaimed production.

Be sure and watch for next year's HB Civil War Days, held annually on Labor Day Weekend, or see a Civil War event in your area.