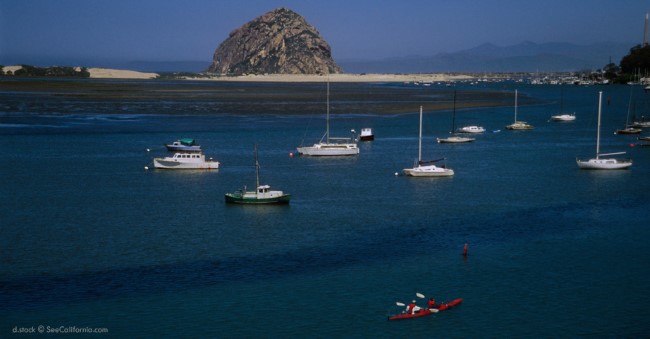 California has a thousand miles of shoreline on the Pacific Coast, and it also has hundreds of lakes, all places where you just might find a bay. A bay is a body of water partially enclosed by land but with a wide mouth, affording access to the sea or a lake. Bays generally have calmer waters than the surrounding sea. A large bay adjoining an ocean sometimes is called a gulf, sound, or bight.

Bays were significant in the history of human settlement because they provided a safe place for fishing and anchorage for boats. One of the best documented bays used by natives Indian populations is in Los Angeles County. It was called “bay of smokes” as Indians used smoke signals to communicate all the way to Catalina Island some 20 -25 miles away in the Pacific Ocean. In recent history, the bays have become places to build ports and residential communities.

Large bays came about as a result of continental drift or folding of the earth’s crust, plus coastal erosion due to waves. The Gulf of California is an example of a bay created by the geological process of folding.

For kayakers, anglers and paddle boarders, bays are often the only place in California beginners can successfully enjoy sports that make use of small craft that don’t perform as well in the ocean. When you rent a kayak or paddle board in California, you most often find rentals offered where there are bays. If you’re looking for a bay to take up sports such as kayaking, the California coast offers opportunities to enjoy this healthy recreation. There are many places in California that don’t specifically have “bay” in their name but offer the characteristics of a bay for kayaking. One place that comes to mind is Shell Beach, a community of Pismo Beach. Point Reyes Seashore is also excellent for milder kayaking opportunities. At some of the Channel Islands you can rent a kayak (islandpackers.com) and take a guided tour, heading through unique sea caves. It’s a blast! Just pick your destination and do a search for kayak rentals.

Here are some California bays where you can start looking, booking and paddling: