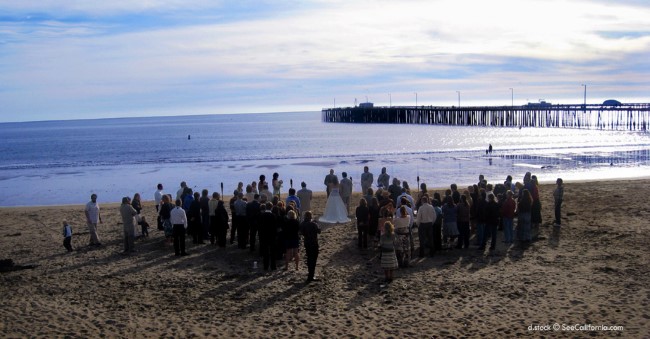 Shown is a beautiful sunset wedding on the beaches of San Luis Obispo County in Avila Beach. Just over the hill and around the bend from this beach is Diablo Nuclear Generating Station, one of two such power plants along the California Coast. The other, San Onofre, is located near the scenic beaches of San Clemente in Orange County and Oceanside in San Diego County. Both are within the reach of California’s two largest population centers. A predicted, and supposedly overdue earthquake the size that recently was experienced in Japan does not provide a reassuring picture of California’s preparation for disaster.

Japan’s situation paints a dire picture: An exodus from Japan is occurring right now among the ranks of those with enough money and places to go, said an American born school teacher working in Japan. He said on a radio program last night that the nuclear contamination is far reaching and the soil tests in his own yard where he and his Japanese wife and children live, are beyond normal ranges. He is currently among those who are seeking places to relocate their families out of the country. He has friends in Australia so is shipping his family off to a new country to live, while he must remain behind, teaching in Tokyo and paying the bills to support them. He said that those in his ranks are quietly, quickly moving out of Japan because they recognize the food, air and land are not safe places for them to live. He said they are going now while they can because the population of around 180 million Japanese residents simply can’t all leave, but those who do it early on have better chances of getting out.

Sound bleak? The rubble from the earthquake is expected to reach land on California’s shores within the next two years. The U.S. is already seeing small amounts and signatures of the radiation from the Fukushima nuclear power plant disaster that happened in March, appearing in our milk supplies. California is impacted by this disaster in terms of fallout, and it could get worse as the plants may someday melt down. Questions about the water and rain reaching our shores remain.

Our beautiful beaches and lovely tourist destinations are not immune from natural disasters and we can only hope that the scenario will not play out in the manner that occurred in Japan during the Spring 2011. Residents near nuclear power plants in California are advised to keep supplies of iodine tablets should a nuclear accident occur. However, just like Japan, California’s major populations that could be affected are immense–they include San Diego, Orange County, Los Angeles, and the Bay Area — San Jose / Silicon Valley and San Francisco, essentially most of the population of California. There were no nuclear power plants built on fault lines when the last major earthquake happened in California.

As most of the 32 million residents in California take calculated risks each day, just living in paradise, we’ll keep our fingers crossed that we won’t suffer a similar fate to Japan. It’s hard to imagine the entire coast of California deserted due to nuclear radiation. The California coast is one of the top tourist destinations in the world and California is also one of the top producers of food shipped to other states and countries such as Japan. We have a lot at stake.