California is ALL ABOUT Pumpkins – A Pumpkin Primer 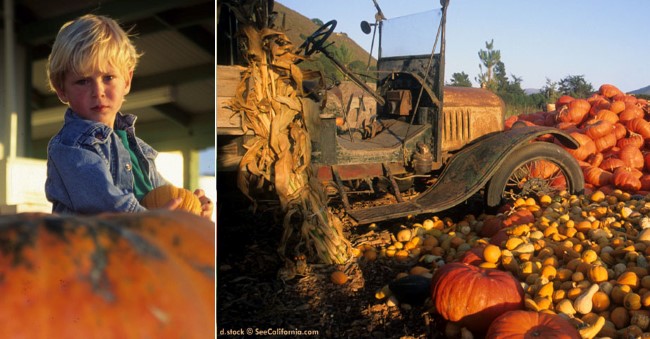 We’re not the largest pumpkin producer in the U.S. California doesn’t even set the record for the world’s biggest pumpkin, which weighed in at 1,818.5 -pounds in 2011, and was grown by Jim Bryson of Quebec, Canada. But we celebrate pumpkins in a big “weigh” at the annual Half Moon Bay Pumpkin Festival which has measured some world-record setters in past years at the Half Moon Bay Championship Weigh Off.

The best way to celebrate fall season is to embrace the pumpkin and there are countless opportunities to do so in California. One of our favorite methods of paying homage is visiting a pumpkin patch where the pumpkins are actually grown. Pick one out and take it home to assure its freshness. However, city pumpkin patches offer much bang for your buck with petting zoos, kiddie carnival rides, food and entertainment. It’s not a fun setting for those who simply love to spend an afternoon in the sunshine surrounded by bright orange pumpkins displayed in bins or on bales of hay.