California Master Chef Is Baking Cakes for the Troops 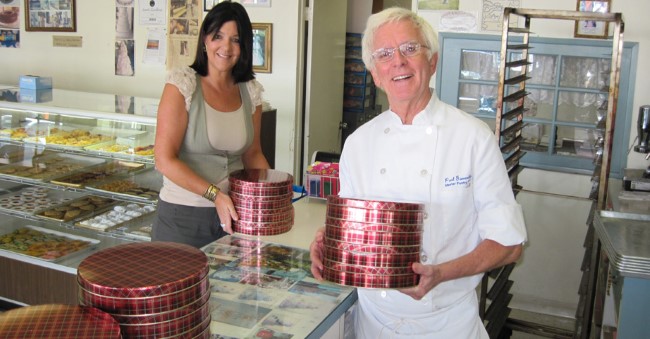 When you're in the Army fighting the enemy in 130-degree heat in a desert far from home, the last thing you'd expect to receive is a delicious cake from your wife but that's what's happening more and more, thanks to the efforts of two California beach residents, Debora George Tsakoumakis and Master Pastry Chef Paul Gauweiler.

Gauweiler bakes from 20 to 50 special cakes a week that Tsakoumakis sends on their merry way to military destinations around the world, brightening the lives of our troops. The dynamic duo have produced and mailed more than 1,000 cakes this year.

“My husband got his cake in the desert and said it was very moist. Everyone was so excited because no one had ever received a Christmas Cake in the mail,” wrote one happy Army wife.

Since 2008, Debora has been shipping cakes to the military whenever families (and patriotic people) order the very special, personalized, much appreciated “edible love.”

“Being able to get something like that meant so much to my husband for Christmas,” explained the wife of an Army sergeant in Afghanistan.

Chef Paul said Debora called him a couple years ago with the idea and he was only to glad to participate, creating mouthwatering 9-inch chocolate, marble and vanilla cakes that serve 8. Deborah customizes messages on top.

The Pastry Chef from Germany, who also baked in Paris and creates many of the delicious desserts at Disneyland 's Club 33, only charges half the cost as a patriotic gesture to our valiant troops. He said chocolate and marble are the most requested.

The layer cakes are covered in sugar frosting and enveloped in a layer of edible fondant, a thick sugary glaze that seals the confection away from the elements. They are then put in a special tin, placed in a cooling packet and wrapped in insulated materials, before being sent Priority Mail to U.S. zipcodes or APO/FPOs (Army Post Offices/Fleet Post Offices).

Delivery time varies depending on destination and other factors so you need to plan early if you want to send a cake. Sometimes the cake (and other mail) takes additional days to be transported to isolated outposts.

“Getting our troops a little taste of home is just what they need to boost their morale,” said one spouse, whose life partner is in a War Zone. The cake amazingly reached him in just 7 days. Most cakes take 8-10 days to reach their destinations.

One woman wrote that her boyfriend “was so impressed with all of it–the packaging, the timeliness and most importantly, the taste. He said it was so nice to have a moist Christmas cake in the middle of the desert.”

Ordering cakes for the troops:

Call 1-800-947-3222 and speak to Debora, or order a cake online at wireacake.com. Even if you're not a family member, you can still Support Our Troops and have a cake sent, thanks to the Soldier's Angels Organization that identifies deployed units in need of a special morale boost.

Paul Gaulweiler, the cake creator and Master Pastry Chef, makes the world famous holiday Baumkuchen Tree Cakes found only in a few places in the U.S. He ships these special holiday and gift treats from his bakery, call 1-714-842-9132 or cakeboxpastries.com. The Cake Box, 6054 Warner, Huntington Beach, CA 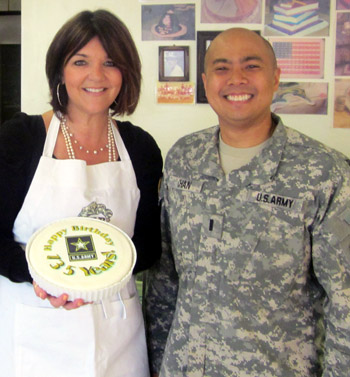