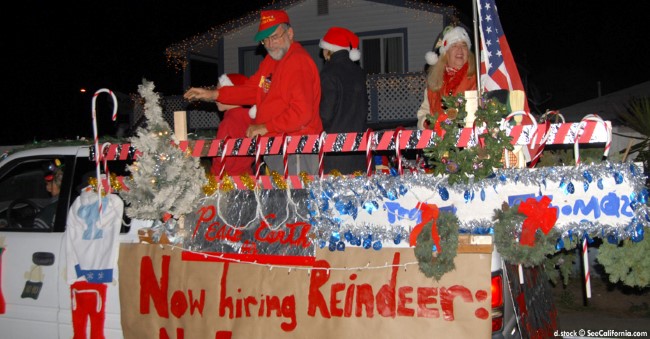 It's not time again for the annual silly YOT CHRISTMAS PARADE (also called the NO PARADE) around town, showing off trucks, cars, YOTS and bicycles all dressed up for Christmas! Just across the street the Harborites are having their fancy yacht parade, while on the beaches of Sunset Beach, California, residents are NOT.

From the event planners: We won't gather at the parking lot at the South end of Sunset, line up in back of the fire engine for the jaunt around town."

Bring some candy to toss to the kids (and parents) lined up on the green strip to wish us all Merry Christmas. –And if you're partying, not parading that night, be sure to come out to see the grand Sunset Beach YOT PARADE pass by!

There are no restriction to participating in a non-event that doesn't happen at Christmas–but sometime around it. There are no fees and the parade basically ends when you loop with the group around the town's one-mile long greenbelt, dropping out as you like and heading back to wherever. It is nothing at all, really. In fact, it is so small and loosely organized that they call it NO Parade. But we've been to 2 of them, and they're really a lot of fun. If you don't have lights on your car or bike, just stand and watch the little group pass by. Wave and cheer them on.