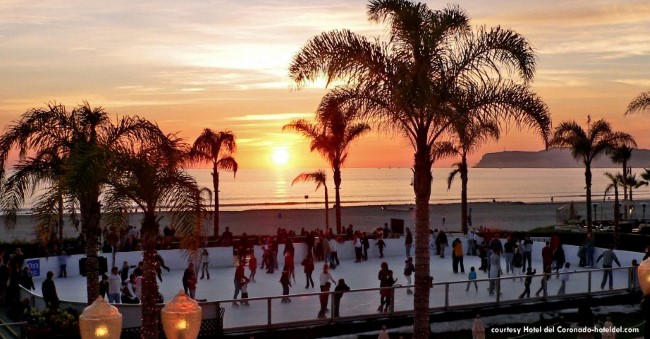 The land of beaches and endless sunshine provides some of the coolest, old-fashioned holiday escapes, including one you can send to the folks “back East” in pictures and experienced at San Diego’s Skating by the Sea, an annual event at Hotel del Coronado (shown in photo) on Coronado Island.

California has produced many world class skaters, though they often come from places where there’s never a snowflake or a frozen lake to learn to skate. Kristi Yamaguchi, Brian Boitano, Peggy Fleming and Michelle Kwan are a few names that have brought skating recognition and fame to California. The ice skating craze is as strong as ever today, as evidenced by the seasonal, outdoor ice skating rinks open to the public starting in November and usually running through the new year.

From San Francisco to San Jose, Los Angeles to San Diego’s Coronado, the big 4 cities population-wise offer fantastic winter escapes providing old-fashioned ice skating in tourist destinations, minus the snow! Here is a list of places you can stay at hotels and resorts within walking distance (usually across the street or on premise) and ice skate in an old-fashioned holiday experience.

There are many ice skating opportunities during the holiday season in cities such as Walnut Creek, Roseville, Santa Monica, Irvine, and throughout California. Stay tuned!