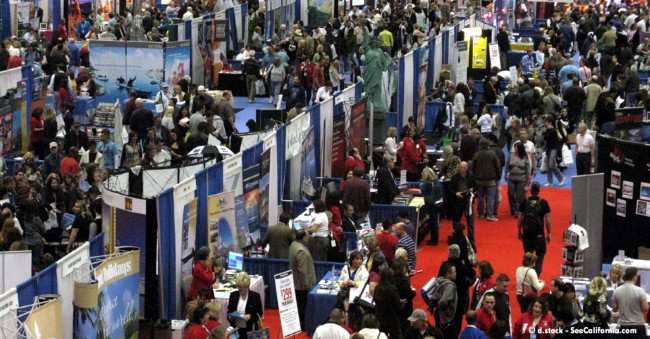 If you love to travel and are looking for some great travel bargains, be sure to set your calendar for the 2012 dates when the major travel shows hit California’s top cities on the coast–San Francisco, Los Angeles, San Diego and Long Beach. The California travel shows are popular events attracting people who attend, looking for deals offered on the spot. One happy traveler came out of the exhibit hall from the Los Angeles Times Travel Show (in photo), reporting that his flight to Hawaii was so cheap, he probably would not use the free hotel room nights bundled with the deal because he didn’t need them. This Asian traveler was quite savvy and knew his prices, having done research before he attended. He was planning to use the cheap flight he purchased at the travel show as a transfer point for other flights to the Pacific Rim where his family lives.

Travel shows feature world destinations, global cuisines, authentic cultural experiences and colorful discoveries with hundreds of destination and travel service exhibitors organized into interactive villages. Seminars, culinary pavilions celebrating flavors from around the world and exclusive travel deals available only during the show may help you plan your 2012 vacation getaways. The pavilion floors are usually packed by afternoon...so we always go early and get out before the crowds are unpleasant. Many stick around, however, for the shows, give-aways and contests.