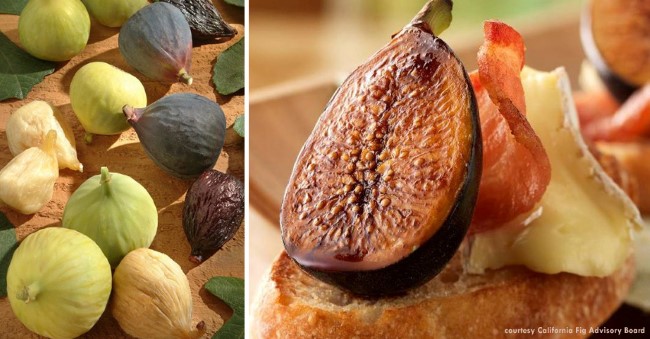 Like so many other fruits and vegetables sold in the U.S., California figs dominate the fig food scene. All dried figs sold in the U.S. come from California, where the fruit grows exceptionally well. The fig’s use as a food spans the globe and ancient times, while the U.S. fig history began around the Mission era (late 1700s – early 1800s) when figs were brought by ships into San Diego, where trees were planted at the first California mission. The fig adapted well to San Diego’s Mediterranean climate earned it the name, Mission fig.

Around Thanksgiving, another fig garners attention for its brown color and seasonal appeal. The Turkey fig is but one of the many varieties that grow well in California’s Central Valley, where the fruit requires full sunshine and soils that drain well. For those of us who remember Fig Newtons, that cookie with fig paste inside a soft pastry cookie, brought attention to this fruit. Some loved it and others didn’t.

Today when you place the fig in the hands of talented chefs, the dishes are incredibly appealing and the fig with its tiny seeds becomes an accent to other tastes and textures. Figs are healthy fruits that have been used (believe it or not) as a coffee substitute and by the pharmaceutical industry. Figs contain proteolytic enzyme that is considered an aid to digestion.

Around Christmas a popular song says, “bring me some figgy pudding.” At Bracebridge Dinners in Yosemite National Park’s famous Ahwahnee resort, a course of figgy pudding is prepared under the direction of Chef Percy Whatley. Maybe it’s the brandy or other liqueurs infused into the pudding that make it so tasty. However, if you can’t afford to sample this dining experience complete with theatre that goes for around $500, you can buy your own figs and check out some amazing recipes that may have you dancing a jig!