Marching Bands in Pismo Beach, then Tournament of Roses Bandfest in Pasadena 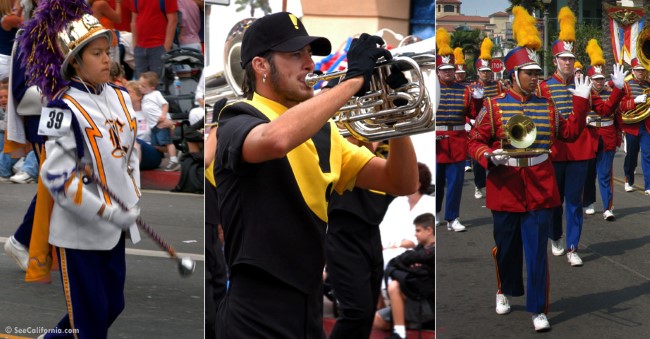 When you watch a parade, the marching band goes by so fast that you seldom hear more than a few notes from a song. And in many parades, if you’re not positioned in the right spot where the judges stands are located, you won’t hear music at all. It dampens heightened expectations for loving a parade.

Head to Pismo Beach this weekend for the 32nd Annual Marching Band Review, put on by the Chamber of Commerce. The event is held on Saturday, November 5, 2011, much like it takes place each year. Marching Band Review bands compete on Dolliver between Hinds and Main Streets from approximately 9 to noon. Awards presented on the Pismo Beach Pier at 1:30 p.m. Contact Chamber of Commerce: (800) 443- 7778.

If you miss this event, the Tournament of Roses hosts a Bandfest on December 30 and 31, 2011 at Pasadena City College ¢ Robinson Stadium.

Bandfest will feature the prizewinning bands of the 2011 Rose Parade performing the field shows that made them famous. Three shows over two days give everyone a chance to see these talented musicians, dancers and auxiliary performers in action. in Pasadena, one day after the Rose Parade. Bands are selected based on musicianship, marching ability, uniqueness and entertainment value. Bands are sought with the ability to perform a field type show while marching forward. There are no set size requirements; bands of all sizes are encouraged to apply. Geographic diversity is also considered, and bands from around the world are welcomed. Applications for the 2014 Rose Parade are in progress right now in 2011. Invitations are issued in the fall, more than a year in advance of the parade, to allow bands time to raise the funds necessary for a trip of this magnitude.

Bandfest Tickets
Ģ Advance tickets are available through Sharp Seating Company at 626-795-4171 or SharpSeating.com
Ģ Same day tickets go on sale at the stadium box office approximately one hour prior to the start of each show.
Ģ Admission is $15.