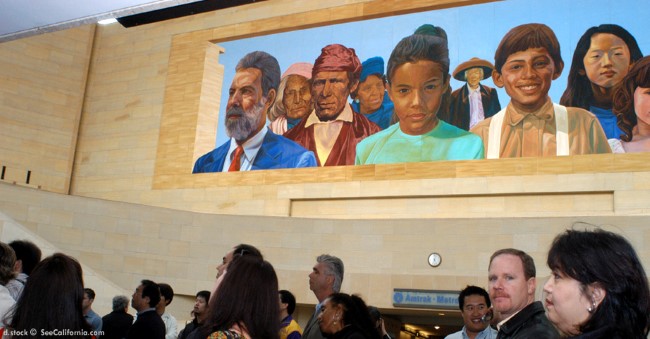 When visiting California’s diverse cities, artwork that surrounds you often reflects the local cultures and influences. One place you may pass through and see a “City of Dreams” shown in photo, is Union (Train) Station in Los Angeles.

The 2010 U.S. Census data was released with few surprises. California continues on a steady path, growing by hundreds of thousands of people, even during a “down” economy when some say people are moving away. While several cities in L.A. County have 85 to 90% Hispanic populations, Los Angeles County Hispanic population is around 47.7% of the county’s ethnic make up, and local art in Union Station reflects the cultural focus, as seen in a mural visitors traveling by rail are treated to when they enter the station.

City of Dreams, River of History, by Richard Wyatt, 1995, is a 79'x 22'mural, a collaboration with May Sun and Paul Diez, located in Union Station’s east lobby. On the lobby floor there’s an inlaid bronze likenesses of trout, turtles, Sycamore leaves and other flora and fauna that once lived in or near the river. The serpentine shape of a tiled bench and a water sculpture along its top take their shapes from the river, and a mountain-like source of a waterfall at one end of the bench is partly built of river rocks. A large aquarium on the opposite side of the lobby was intended to replicate the Los Angeles River’s freshwater environment. On the walls of the aquarium artist May Sun created a dialogue with Wyatt’s mural. Faces etched in the glass replicate larger painted images of Gabrielino Indian and Latino settlers as well as contemporary Los Angeles citizens, which appear in Wyatt’s imposing mural. Wyatt, in turn, has tied his work to Sun’s by repeating some of her river motifs in the border of his massive painting.

The Los Angeles Metro system also is filled with unique art reflecting the local train stops along the various routes. There are guide books for traveling the affordable rail system and seeing the artworks (often sculptural installations,) but L.A. is only one city of many filled with artistic images. San Francisco features entire neighborhoods where fences and walls are painted with original artwork that you can find on your own or enjoy in guided tours.

Outdoor mural/art cities in California include Lompoc and Exeter, though there are many more!