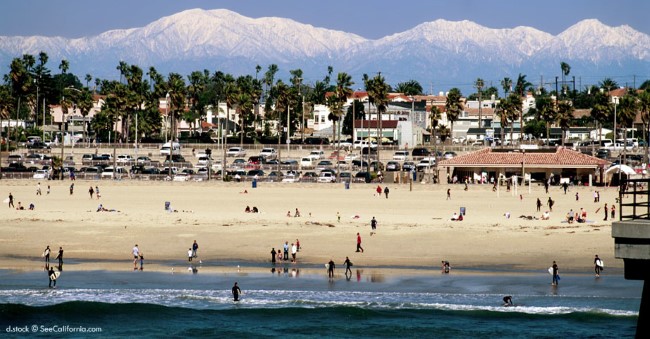 Pictured is a cool California beach (Huntington Beach) on a winter day with less crowds, more beach, and cleaner air.

What does a team of researchers from UC Irvine Public Health department do when they need to get out of the box and go to the beach? They turn their passion into action, researching the restorative effects of beaches. Everyone knows that when you feel down, you go to the beach to clear your head and feel renewed. Or do you?

A professor and researchers at the university located just a few miles from the beach studied people’s perceptions of coastal conditions and feeling of being refreshed. Nearly 1,200 individuals of all ages answered questions in all types of weather over the course of a year at three state beaches, one of the top vacation spots in the U.S.

Visitors perceived greater “restorativeness” (a buzz word used often in the study, referring to the feeling of being restored) at beaches when temperatures were at or below monthly averages and the beaches were at low tides. Also leading to better vibes in feeling “restored” were bigger beaches and lack of pollution (that fog, haze, brown color, or yellow line of air visible when looking out from the beach to the sea.)

The report associated smaller beaches with less beach area per visitor and global warming as possible, future detriments to offering humans restorativeness. However, when we ask visitors to California beaches what their impressions are compared to the beaches on the East Coast, many say they are actually surprised at the coolnees of the temperatures both in and out of the water in the Pacific Ocean, and often state they prefer the warmer ocean temps found at other beaches in Florida and around the globe.

Californians accustomed to their local climate and beaches often cite crowds and heat as offering thrills. Events such as the U.S. Open of Surfing in Huntington Beach where massive crowds pack into small areas or summer weekends at San Francisco, Santa Monica and San Diego beaches where parking is nearly impossible, are part of the excitement that beach-goers expect and seek.

Though the experience of crowds and hot weather may be less restorative, many beach-goers actually prefer those conditions over emptier, cooler beaches.