Dana and Larry's 10 PLACES TO EAT IN SAN PEDRO 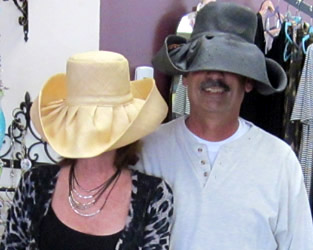 Dana and Larry are a couple who really enjoy eating in San Pedro. And well they should, since their family roots run deep in the Port District area of the City of Los Angeles at the South End of Palos Verdes Peninsula. In the 1540s, Spanish Ships operated off the coast of what became San Pedro.

Larry grew up there and remained a resident for more than 41 years. His dad was a fisherman and Larry worked in the fish markets as well as at the famous port. His parents still live there as does his daughter and cousins. One of his aunts was so active in the community she has a street named after her.

Here's where it gets even more interesting!

Larry's parents and Dana's parents actually got married (one year apart) in the same Catholic Church. Dana's great-grandmother came from the South of France in the late 19th Century and established a Bakery at First Street and Pacific Ave. Her grandmother also worked there and her father was born in the beautiful town, site of the Cabrillo Marine Aquarium. Although there are many fine eateries in San Pedro, here are some places, Larry and Dana go for Delicious Dates!