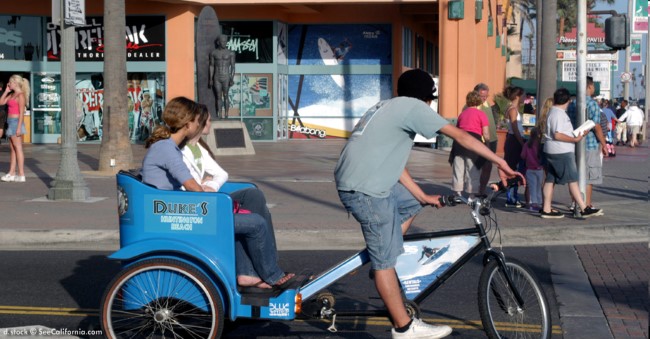 While two cities, Santa Cruz & Huntington Beach, once tussled over the rights to claim the Surf City moniker, these beach cities have more in common than either could ever imagine, including local turf wars over beach-based business enterprises.

At a city council meeting in Huntington Beach on Monday, Sept. 19, 2011, a local pedicab business owner pleaded for council members to help protect his company from invading outsiders who brought pedicabs from San Diego and worked his turf at the U.S. Open of Surfing in July & August 2011. Posing as event vendors under the umbrella of the US Open special events permit, the poachers provided pedicab service at the beach without following local safety guidelines and normal licensing procedures, said the disgruntled owner of Bluewater Pedicab Taxi.

Other issues and pleas that have been introduced by citizens of the community have included surfers asking the city council to ban fishing from the Huntington Beach Pier because the fishing lines get in the way when surfers "shoot the pier," a popular term for surfing between the pier pilings.

In Santa Cruz at the city council meeting held on Tuesday, Sept. 13, 2011, officials dealt with another surfing issue that has became as hot as a beach bonfire for which a couple is suing Huntington Beach. The local surf schools in Santa Cruz first argued about licensing of their enterprises a several years ago, and now they are angry about imposed rules and regulations limiting such things as teacher to student ratio and number of surf schools allowed to operate at their popular beaches. The city collects a percentage of earnings from the vendor who wins a contract to supply surfing lessons for Santa Cruz city programs, and, according to the new regulations, this vendor would be exempt from more restrictive rules that other surf school operators must adhere to.

(San Diego's popular surfing beaches at Encinitas dealt with the same issue in 2009 when more than a dozen surf camps brought crowds of children and unwelcome megaphone noise, prompting complaints from residents, including other surfers.)

In Huntington Beach, the city recently annexed Sunset Beach where residents want Junior Lifeguard classes regulated and moved to other locations upstream in HB because of the crowds of kids that swamp their beach and traffic that clogs narrow streets when parents pick up their children or drop them off.

Back in Santa Cruz, the police department also seeks to enforce bicycle licensing and create stiffer fines for non-licensed bikes because the beach bike path has become too crowded. In Huntington Beach, the city decided to NOT require bicycle licenses because the downtown and beach paths are too crowded with bicycles and would take up too much of limited staff time that the PD has available for regulations & ticketing (Huntington Beach recently earned a Bronze designation as a Bike Friendly Destination.)

The hot button issues in California's Surf Cities are similar and sometimes the same-though the outcomes and decisions vary according to each locale. But for pure entertainment, it's fun to compare two places where beaches and surf culture are important, and where the there's more in common than either Surf City can fathom! Posers beware!