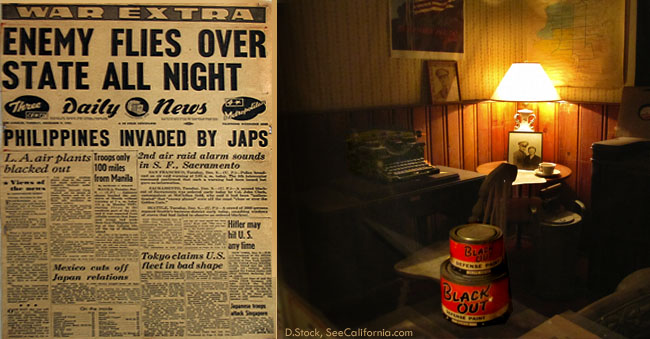 Pictured is a small, dark room inside the Fort MacArthur Museum in San Pedro. Two cans of Black Out sit on the window sill, much as they once may have appeared during WWII when Californians were required to dim their lights or turn them off because of potential enemy attacks. The museum is open to the public and provides WWII memorabilia, actual newspaper articles & accounts, and tours of the tunnels and bunkers at Fort MacArthur.

September is National Preparedness Month and more than one person claiming to be government insiders have warned that the U.S. is like a sitting duck when it comes to possible enemy attacks.They suggest the easiest type of attack to cause disruption would be an EMP (electromagnetic pulse) attack. EMP technology supposedly shuts down all electrical systems, which means no electricity, no pumping of water, no food, no cars, no banking system, cash registers, etc. In the worst of predictions, over half the population of the U.S. could die within a year due to lack of water and food. Just visualize your local grocery store and how long it would take to clear off the shelves and empty out the entire food supply. Then what?

None of us want to think about disaster-it's not a pleasant subject. But a recent event in which the power in Arizona went out and service was cut-off to portions of San Diego, Orange, Riverside and San Bernardino Counties, brought some real eye-openers to those who found their cell service likewise cut, gas pumps not working, and stores and services disabled. "I can't imagine how people could live like this," said one girl interviewed by a reporter at a gas station. The girl was frustrated that she couldn't call her family to let them know where she was or why she would be late coming home due to major traffic jams.

Such occurrences show the vulnerability in our grid system and the need for preparedness. Some are urging the president to beef up the Federal Power Act to protect the bulk-power system and electric infrastructure critical to the defense and well-being of the United States against natural and man-made electromagnetic pulse (EMP) threats and vulnerabilities. Here's one of the main organizations working to educate and legislate changes to protect the nation: empactamerica.org