Footloose and Car-Free, Riding the Rails in California 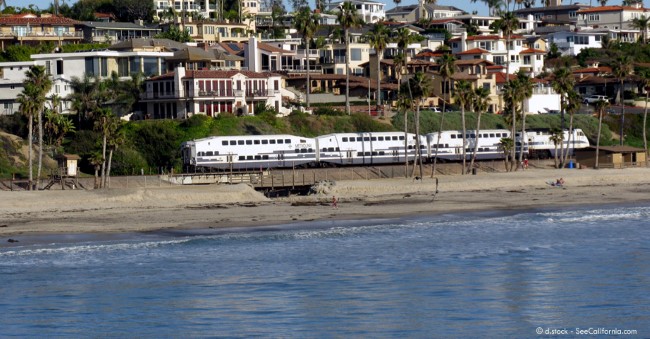 Not all of California is connected by rail, but some of it is. And it's not just Europeans who seek connectivity and car-free vacations in California. Sometimes a city's traffic may seem just a little to odd or hectic, making the driving adventure more of a scare than enjoyment. Several cities come to mind-San Francisco with all its rail lines that cross the roads that go steeply uphill and down; and Los Angeles Freeways during rush hour (it isn't just tourists who get stuck in the mother of all rush hour traffic jams.)

For coast cruises between San Diego and Central Coast to San Luis Obispo, Amtrak (amtrak.com) Surfliner offers direct service. This s a great route to get between popular destinations such as San Diego and Los Angeles. Another local option shown in the photo is Metrolink (metrolinktrains.com) which connects the beaches of San Clemente with all of Los Angeles, San Bernardino, Riverside, Antelope Valley, Ventura and Orange County. Metrolink shares the rail in some areas with Amtrak and you can access Amtrak trains along the route to go to other places outside Southern California.

Coast Starlight connects Los Angeles with Portland and Seattle via San Luis Obispo, Oakland and Sacramento. If you're trying to get between L.A. and San Francisco or Sacramento, this is one option that will take you the distance.

San Joaquin connects Oakland, Sacramento, Stockton, Fresno and Bakersfield. We've taken this train from Sacramento to Yosemite National Park without having to drive. The train between Sacramento and Merced transfers to a motor coach that takes you up the mountains into the park, where buses provide access to the hotels. You can also take daily bus tours once inside the park offered through another company.

Capitol Corridor is a popular train between San Jose and Auburn with many popular Bay Area stops. This popular train serves the campuses of UC Davis and UC Berkeley, allowing students the option of taking their bicycles on the train and operating car-free throughout the school season.

Getting to the trains from the major airports — each major city has a slightly different plan of access. Los Angeles Airport connections via a shuttle to the Green Line, part of the Metro Rail system, provides access to Los Angeles and the Amtrak Union Station, the hub of Amtrak's network for Southern California. You must transfer to the Blue Line to downtown, then the Red Line to Union Station to take many trains. It is by far the cheapest option costing between $1.50 and $4 but is not for everyone. Flyway Bus goes direct from LAX to Union Station for around $7-10. This is the preferred choice.

Each city offers different options and requires a bit of investigation. But for those who prefer not to drive, once you have the itinerary set, you're on your way to car-free vacations in California, and for many, that equates to carefree.