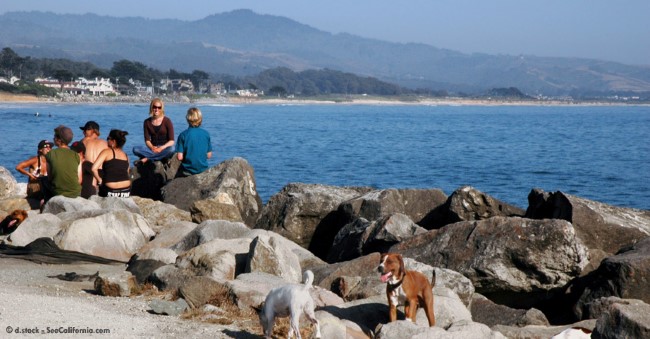 San Mateo County has less than a 1 million people (around 720,000) and encompasses most of the San Francisco Peninsula (approx. 450 square miles of land) south of San Francisco, and north of Santa Clara County where the city of San Jose alone has over 1 million residents!

What's so special about San Mateo C0unty? Its lifestyle options are incredibly diverse, ranging from city & commerce to beach vibe. Along the way between San Francisco Airport and the coast are the lush landscapes of Woodside, home to Filoli Estate and Gardens, a must-see tourist attraction. While a concentrated, popular portion of the county is within the heart of the city filled with urban life, chain stores, planes flying overhead most the time, and a mere 10 minute drive from San Francisco, the outskirts along the ocean seem almost remote.

For our liking, we always head to the coast, though spending a night at the Hyatt hotel or other accommodations near the airport often makes sense due to commute times between the coast and SFO.

Once out of the busy regions that offer their own attractions such as the Hiller Aviation Museum or Pez (Candy) Museum, the coast offers some of the most beautiful scenery and coolest people you'll ever meet. When Californians return from New Zealand and say that it reminds them of the way California once was, the same holds true for Half Moon Bay compared to Southern California beaches.

It's almost a "Leave it to Beaver" atmosphere of easy living that seems slightly unaffected by the nearby throngs of high-tech, high-pressure people and jobs in Silicon Valley. The corporate world loves San Mateo County coastal escapes for their events, though hotels along the way are limited to a Ritz-Carlton Half Moon Bay and smaller properties mostly independently owned and operated. When the Ritz-Carlton was built, it took decades to turn it into a reality as the residents were vocal and many unhappy about turning their paradise into something less, as they envisioned the change.

San Mateo County enjoys lots of open land and the construction of the hotel required beach paths, public parking and access to the same beaches residents have always enjoyed.

Among the movements in the county are a fresh food initiative in place for a number of years. The local chefs at gourmet restaurants source their foods from local farms in the county whenever possible. Other programs seek to help farmers maintain their farms. Along the coast and valleys you may see strawberries, wine grapes, lettuce, flowers, pumpkins and other crops seasonally.

Several events attract thousands to normally slow and easy places. The Half Moon Bay Art and Pumpkin Festival in the fall is a huge draw, and when Mavericks, the annual big wave surf competition is announced, people rush to the coast to watch the world's strongest surfers take on waves up often 50 feet high or bigger. It's awesome.