The Bridges of California, Beautiful, Bold, and Old 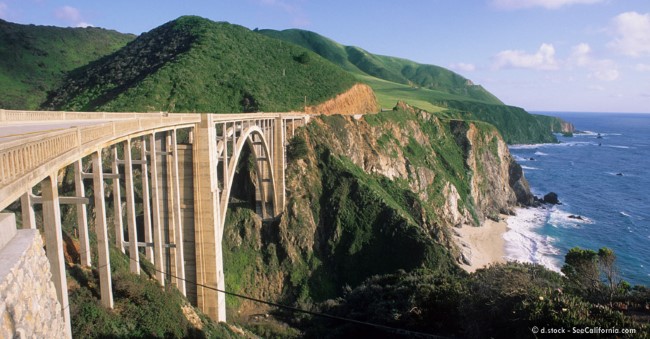 There's no experience that can match driving over many of California's spectacular bridges. From the Golden Gate with its signature orange paint spanning the San Francisco Bay to the very green Vincent Thomas Bridge in Los Angeles Harbor, bridges provide sweeping vistas, unique rides, and are amazing to look at sometimes.

California has thousands of bridges, and more than 8,300 California bridges are 50 years old or older. Many fill the pages of the National Register of Historic Places, and they make for great attractions to see when your'e driving on road trips throughout the state. Some bridges such as the landmark Bixby Bridge shown in the photo offer places to pull over and take a look. Along the Big Sur Coast on Highway 1 there are a few small areas to park your car and photograph the spectacular bridge, Pacific Ocean and surrounding scenery. The Bixby Bridge has appeared in dozens of car commercials and is usually shown from helicopters in such ads. It opened in 1932, spanning Bixby Creek, and connecting a portion of the Big Sur coast 13 miles south of Carmel. The reinforced concrete open-spandrel arch bridge is 714 feet long.

Bad news about California bridges: A report released in 2011 showing the state of the nation's bridges ranked California 18th among states in terms of its bridges needing repair. Approx. 1 in 8 bridges in California are structurally deficient, which means they're not considered unsafe, but are in need of some sort of structural upgrades to meet today's standards. Most bridges are built to last around 50 years and California's average age of its bridges is 44.4 years old.

Some old enough to remember the 6.9 magnitude Loma Prieta Earthquake that shook the Bay Area in 1989, may recall watching with horror as news helicopters showed cars dangling on a collapsed 50-foot section of the upper deck of the San Francisco - Oakland Bay Bridge. Californians began asking questions about the safety of their bridges at that point, as plans were already in place to retrofit bridges not built to withstand current safety standards. Amazingly only one person died (indirectly) on that bridge failure, though an additional 42 people died inside their cars, trapped in the lower deck of the Nimitz Freeway which connects to the Bay Bridge. That stretch of freeway had been built around 50 years earlier.

Good news! 7 out of 8 bridges in California are not considered structurally deficient, so you can generally drive on or under a bridge and not have to hold your breath with fear of dying, an old wive's tale many kids share, trying to scare each other.