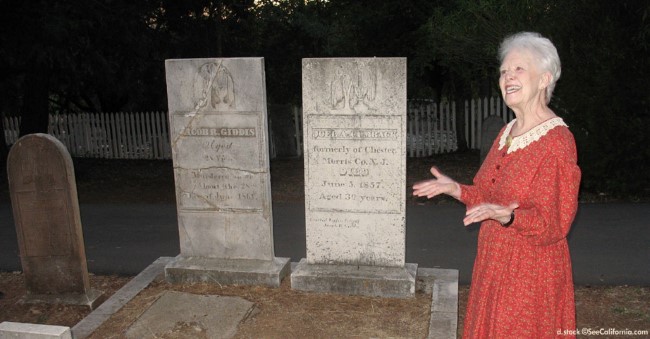 Pictured is Columbia State Historic Park's Stories in Stone grave tour held each October to celebrate Halloween and honor the dead who forged the great frontier during the California Gold Rush.

California has its fair share of graves. With millions of people dying, they ‘gotta go somewhere after they've expired and the shells remains in their decaying state. Grave stones with epitaphs alone don't make the man, but the stories that surround particular people buried do provide interesting stuff for grave tours. Halloween is traditionally the time that Grave Tours are offered, and 2011 will not disappoint.

The grave tour season in which museums, a California State Park, and even a mayor participate, dressing up like the subjects featured in the tour as they may have appeared when they were alive, provides an entertaining ‘A' ticket to the Halloween season. We're digging up events and have uncovered grave tours in Columbia, San Diego, Long Beach and City of Industry, to date.