Broads Take Over the Streets on Halloween 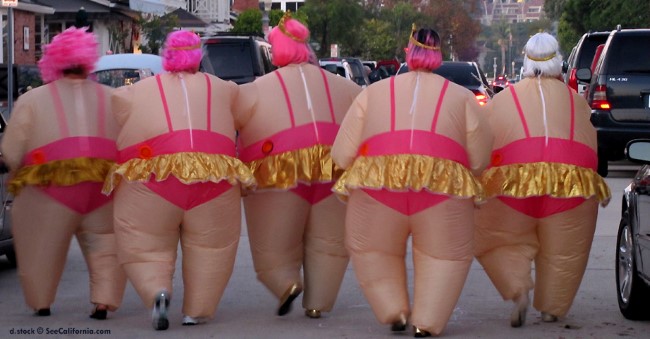 When five broads took to the streets on Halloween night, the traffic actually had to back up! That’s how much space they required! It was one of the unexpected surprises in the land of California beaches & bikinis where stoutly, pink-haired ladies filled their swim suits and everything thing else as they wandered about on October 31.

It’s the day after Halloween. The candy is everywhere. If you do one positive thing for yourself, give it ALL away. 61% of California adults are overweight or obese, but the figure is better than 39 other states where 67% of American adults are overweight or obese and nearly 33% of children and teens fall into these categories, according to “F as in Fat: How Obesity Threatens American's Future 2011.”

In California the figures have steadily increased over the last two decades. Here is the percent of overweight California adults by year:

Similar trends are seen in California’s kids– 15% of children ages 10 to 17 are obese, and there are now children as young as age 11 with adult-type diabetes, something not seen 40 years ago. What’s being done? Legislation to remove soda beverage machines from middle schools & high schools. Other attempts such as controlling types of food advertisements targeting youth have met less success, most likely due to food lobbying efforts. The main suggestions to take home from this study is that if you push away from the computer and take a walk, integrate some healthier stuff into your meals with less French Fries, hamburgers, greasy foods, ice cream and sodas, and begin paying attention to what you eat by looking at it rather than the computer, iPhone or TV while you are scarfing it down, it’s a first step in trying to get a handle on that love handle around your waste.

Overweight and Obesity are risk factors for: