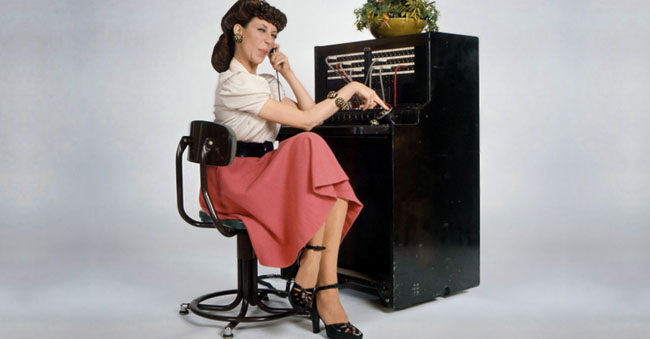 Pictured is Lily Tomlin as Ernestine the Operator, a character she made famous in 1976 when she appeared in a parody of a commercial on Saturday Night Live, in which she proclaimed, “We don’t care, we don’t have to...we’re the phone company.” Ernestine was a nosey, condescending telephone operator that AT&T offered Tomlin $500,000 to play in a commercial. In typical Ernestine fashion, she declined saying she didn’t care about the money, she had to maintain her artistic integrity!

One of the busiest calling days of the year is Thanksgiving, when people talk to loved ones. Over the years, one of the persons who has helped connect people more than almost any other is the Telephone Operator, both Long Distance and Directory Assistance. I was a DA Operator back in the 1970s and I know how important the job is. I later was in charge of a program that honored Telephone Operators. I’ d like to honor them again today. Way back when, the first telephone operators were men, but many of them didn’t do such a good job and were replaced by women.

Today, men have redeemed themselves and there are plenty of men and women serving as operators, assisting you in your various communication needs.

I once interviewed several veteran operators and what stories they had.

Happy Thanksgiving Operators Everywhere. And Many, Many Thanks For All You Do! (Editor’ s Note: Pulitzer Prize Nominee Craig MacDonald’ s new book, Old West Christmas – Tales with a Twist, would make a great Holiday Gift. See: goldrushglimpses.com