How to Mourn Well- Elaborate Dress & Ritual Once Expressed Grief 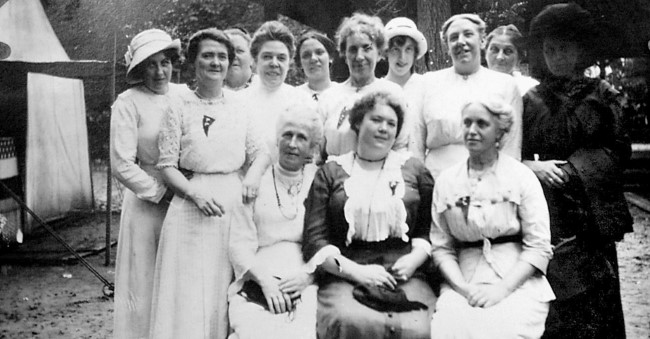 Shown in the photo are a group of ladies dressed in long white dresses popular 100 years ago. The woman on the right is clothed completely in black and wears a veil, all part of the costumes and customs to mourn deceased loved ones.

Widows dressed in black and houses hung with black crepe today might be mistaken for Goth. But in the 19th and early 20th centuries, grief in the United States had many prescribed customs such as these. Clothing, accessories and other traditions helped people of that era deal with loss. Today, we host fund-raisers to help cope with our grief, but Victorian era mourners had an incredible set of tools at their disposal to help them get through hard times. During an era when most deaths took place at home, specific mourning conduct helped families communicate their loss to the community as well as protect their need for privacy.

Departures: A Century of Death & Dying in Ventura County was an exhibition at Ventura County Museum in Ventura. This interesting exhibit included Victorian mourning clothes and jewelry, historical photographs and funeral home artifacts, exploring how private and public rituals have evolved.

A special guest expert on costumes and clothing, Shelly Foote, was featured in an illustrated talk at the museum. She explored the origins of some surviving customs from that period, such as memory cards, and the demise of others, such as jewelry made from the hair of the departed. Shelly Foote's 30-year career with The National Museum of American History, Smithsonian Institution, included supervision and development of their 1700-1920 Costume Collection. As Assistant Chair of Social History, she was also responsible for more than 250,000 objects. She served as president of the Western Region of the Costume Society of America.