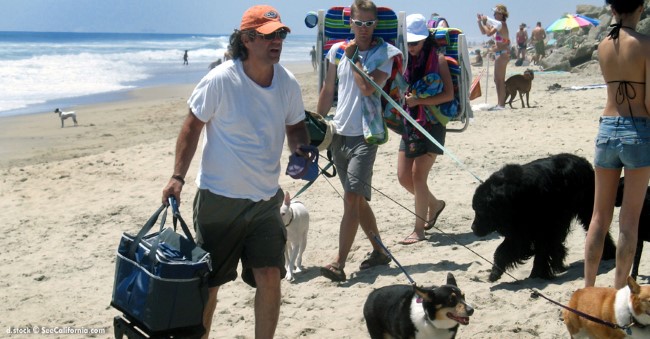 Ocean Beach in San Diego has had one of the longest operating dog beaches in California, and offers one of the best social experiments in human behavior. Can people be responsible for their pets, cleaning up after them and controlling them, thus avoiding harm to other dogs and humans at the beach? Cities throughout California have signed on for this test and the results have yielded mixed results. No in depth, long term studies of sand and water quality, dog bites incidences and other such data exist. While many regions have never enacted official policies due to their isolated and low trafficked beach areas, major cities with populations in the millions can be greatly affected by additional dog populations.

Santa Monica dog owners are tired of the theories and they want their own dog beach. In fact, Santa Monica city council met this past week and discussed the issue of creating a dog beach once again. The mayor pro tem and a city council member urged colleagues to direct city staff to work with California State Parks on the creation of a pilot program for an off-leash dog area that would stretch from the beach down to the waterline. Working with Santa Monica based Heal the Bay organization, they hope to create a dog beach that’s slightly more eco-friendly than existing ones in other urban areas. The one link that has been a major issue in the plan is the state. Unleashed dogs on state beaches are prohibited unless the California State Parks superintendent approves, and the State Parks agency, which owns Santa Monica State Beach, has opposed past efforts to ease rules and allow dogs on the sand.

Pet owners love dog beaches, but not all dog owners who use these beaches think they are safe. An article written by dog owner who uses Ocean Beach offers a glimpse into the truth behind the idealized notions that people are and can be responsible for dogs. To date, fining people for their pets has not been an option. The dog owner calls for the closure of his very own Ocean Beach Dog Beach, mainly because he believes self-policing hasn’t worked and irresponsible dog owners make the beach unsafe for kids, families, surfers, swimmers, and even other dog owners. His is but one opinion in the mixed bag of dog beach experiences.

It’s estimated that nearly half the U.S. population owns dogs.