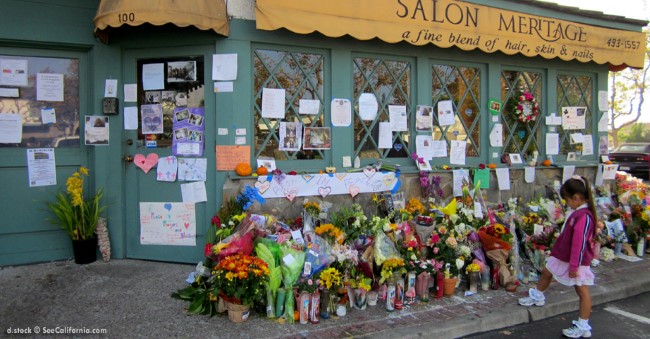 There are moments in history you never forget because they are so dramatic that they shock you to the core. Maybe you didn’t actually experience them first-hand, but nevertheless, you feel something when reminded–JFK’s murder, Michael Jackson’s death, Princess Diana, survivors of Nazi Germany describing chilling tales of torture, 9-11, and locally in California, the Seal Beach mass murders on October 12, 2011, all have left their imprint.

I watched the Michael Jackson trial on Wednesday afternoon, Oct. 12, and was hurrying with computer chores to get out the door and head to Seal Beach for my afternoon walk on the Seal Beach Pier. Suddenly breaking news interrupted the broadcast that was my background noise to drown out other sounds. The trial pre-empted regularly scheduled shows, so how in the world could something be so important to break in on “breaking news”, I asked myself. It was probably a car chase, I suspected.

Unfortunately it was the announcement and sketchy details of a horrific mass murder in Seal Beach where I was planning to go in just minutes. A disgruntled ex-husband of an employee at a Seal Beach salon walked in, armed with 3 guns and began firing at his intended victims and innocent bystanders. He surrendered to police just blocks away, according to the reports. The news was heart-wrenching, and my family quickly scrambled to find out details so we could determine if our friends and associates were among the victims.

Whether you know someone involved in a tragic accident, or you are affected in some way, the healing doesn’t come fast and like one husband of a Seal Beach shooting victim said, he hopes everyone remembers his wife and the other victims, and NEVER forgets.

This past weekend proved that people are trying to move on, though many are trying to heal through causes such as raising money for the families of the victims. 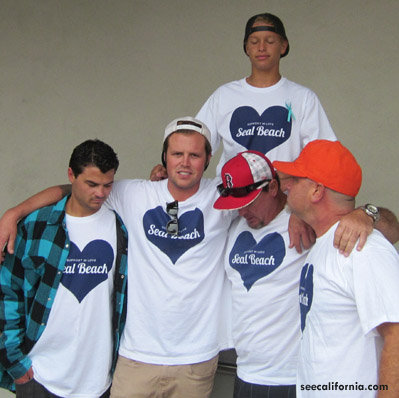 Memorials were held in the park across the street from my home, at local churches, and fundraisers brought out family members and friends (shown in photo) of the deceased victims, as those touched by a tragic incident try to cope with the sad fact that they will never see their loved ones again.

Strangers, friends, and passers-by continue to stop day & night at Salon Meritage to honor the victims. Poignant messages are taped on the exterior walls of the salon, including many from children at local schools. Most say–We love you; God Bless You! Our hearts are with you; or similar comments. There are countless heart-felt messages, bouquets of flowers, candles burning, helium balloons, and pictures of the victims smiling during happy times. If you want to contribute financial donations, simply visit sealbeachchamber.org and click on the blue heart which says, “Donate in Love”.

A poem written and placed on the wall outside Salon Meritage says:

Innocence lost.
A community is shattered.
Sad and senseless deaths
Of people we all knew.

A peaceful ocean
Becomes an ocean of tears.
The nightmare is upon us,
Violence born from our worst fears.

Sorrow filled words
Cradled by thoughts and prayers.
Voices of young and old together,
Proof that love survives. Love cares.

Then deafening silence.
And we are left to wonder why.
There but for the grace of God,
Go you and I.